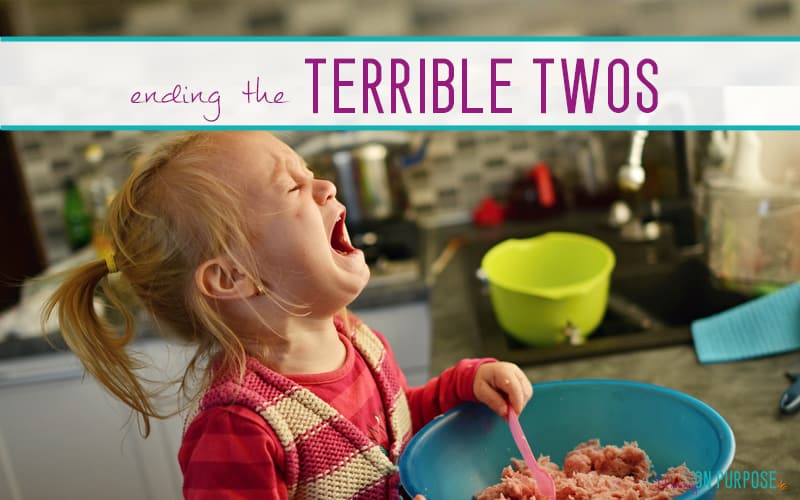 As we approached two with our first kiddo, I started waiting anxiously for “the terrible twos” to set in

Everyone said it was coming, and according to them, our sweet chill baby was about to become a reckless shrieking monster.

With every little disagreement or new hard lesson learned I’d think “this is it… we’re about to have our first massive fight” (cringe).

But it just… didn’t happen.

So I started to wonder, was there something different about my kid or about me that was allowing us to get through this generally terrifying stage without any “terrible” happening?

I mean sure, he cried when he was told “no”, and when he got over-tired he was a little less chill – but he’s also two. Those things are basically a given.

But I could see a vast difference between my toddler and other kids his age when it came to the amount of reaction to a situation not going his way.

My kid was easy to calm down, easy to distract, and overall, easy to get along with. (I was pleased, haha.)

All parents have their strengths and weaknesses… one of my strengths is patience. I’m super patient, and I wondered for a while if “the terrible twos” were really just a lack of patience on the part of the parent.

I wasn’t sure, but seemed like a decent explanation.

Or maybe he was just a laid back kid… either way, I wasn’t complaining!

But then, OVERNIGHT, it happened:

Now, before I tell this story, let me say that I know that not all kids are exactly the same and that many kids have multiple stressors that could contribute to the terrible twos.

Daycare for instance – it’s been noted that children who spend long hours in daycare are at increased risk of becoming aggressive, in addition to developing other behavior problems (source). But my kids aren’t in daycare, so that doesn’t apply to them.

Lack of sleep is another one that stands out to me as a likely cause of behavior problems. (And lack of sleep is pretty common at this age, as they start to fight the nap!) While my toddler goes to bed late, he always gets at least 13 hours of sleep per day, so he is NOT lacking sleep.)

I also know that for some, their terrible twos will be totally related to ours, and so I must share this in case it can help other parents deal with the terrible twos quickly and easily!

So, this is what happened in our home:

At about 2 1/2 we decided it was time for potty training, and I was nervous – I’d (again) been told by “everyone” that potty training boys can be hard and I should prepare for an uphill battle. (Which wasn’t the case AT ALL. We potty trained our son about 90% in about 3 days, 100% within two weeks.)

But it was halfway through potty training that I started to notice the REAL HUGE DIFFERENCE… in the way my toddler reacted to situations that he didn’t love. A huge difference in the way he expressed himself.

And the difference was terrible!

Shrieking, throwing his body around, hysterical crying. Even his reasoning seemed to have changed – er well, he seemed to have become UNreasonable. We had particularly bad problems with nap time and bedtime.

My kid, who has napped every single day of his life, started declaring that he “didn’t want to go to sleep”, and having these ALL OUT HOUR LONG FITS at nap time and bedtime. (I am super stubborn though, so I was consistent, and he did nap eventually. Like I said, I believe an overtired kid is a cranky kid!)

I think it actually started on and off closer to the beginning of the potty training experience, but I didn’t see (or notice) a consistent pattern until about a week in.

One night, out of frustration (my pretty stretchy patience was stretched to the limit), I left him alone to shriek and cry in bed by himself. When I returned 5 minutes later (I had cooled off, but he hadn’t) he told me – sobbing – “mommy doesn’t love me”. (Tears…)

My heart was nearly broken, and I was beside myself with how to handle my poor baby and his terrible twos.

NOTHING I said was getting through to him.

And the little disagreements we had during the day weren’t nearly as easily diffused as they used to be.

I said to my husband one night (after fighting for an hour to get him to bed) “Potty training has broken our awesome kid!”

So then we started having our standard “well, change can be hard for kids, learning new things (understanding they are “growing up”) causes them to want to be more assertive, blah blah”, but it just didn’t seem to FIT.

He wasn’t resisting the potty training.

It wasn’t like we were forcing unwelcome changes… he was EXCITED about peeing in the potty. Everywhere we went this whole potty thing was celebrated, and he loved the attention and the praise, not to mention the chocolate treats for every successful pee or poop.

And we weren’t messing with his emotions either, shaming him when he had an accident or making him feel like we were disappointed in him.

The whole thing had been a really positive experience – for all of us.

So it just didn’t add up that potty training could have broken my kid. It was the ONLY reasonable explanation for the sudden onset of the terrible twos, but it was also unreasonable.

There HAD TO be more to it.

I was scrolling Pinterest (which I use daily for my work) when I found the answer. It was an article called “Does Sugar Affect Behavior in Children?”

And INSTANTLY I knew what the problem was. (I didn’t have to read the article. I am a FIRM believer that sugar affects behavior in children. Sugar and sleep. That’s why my children get very little sugar on a daily basis, and that’s why I’m such a nap stickler.)

As far as I’m concerned, we were basically giving him mood-altering drugs.

Ending the Terrible Twos in 24 Hours

I told my husband my theory, and he agreed that our son’s new (and terrible) disposition definitely coincided with the introduction of the chocolate treats, and it wouldn’t hurt to remove them from his diet ASAP.

(Of course, that left us wondering if we took away the chocolate treats, would that end peeing on the potty too?)

That night, before bed, we told our bug that he had been SUCH a big boy about peeing on the potty, and we felt like he was done “learning” to use the potty. We told him that meant he wouldn’t be getting chocolate treats anymore, but that he got a SPECIAL BIG treat.

The next day, we drove right to the toy store and let him pick out one toy. (An experience he never had before.) We took our time choosing, and we made sure we stressed over and over that because we were getting a special big treat, there would be no more chocolate treats.

The story ends kind of suddenly here, because we never had another hysterical hour-long meltdown.

The day we took away the chocolate, the terrible twos went away.

He asked for chocolate treats after he went to the potty for about three days, but we just reminded him about the special big treat (and played with it with him). We were VERY FIRM on the no-more-chocolate rule. (We removed them from the house, and showed him that they were “all gone”!)

There’s no doubt in my mind that my son can’t handle that much sugar on a daily basis.

Only a short while before we potty trained with chocolates (again I can’t believe I didn’t see the connection sooner) I had read this very interesting article on how sugar and chocolate can disrupt a toddlers sleep.

We are planning to use stickers to potty train his sister 😂.

Related: How to Get a Toddler to Eat Vegetables

Do you think sugar or chocolate could be contributing to your child’s “terrible twos”? Are you willing to try limiting it to see if it makes a difference? 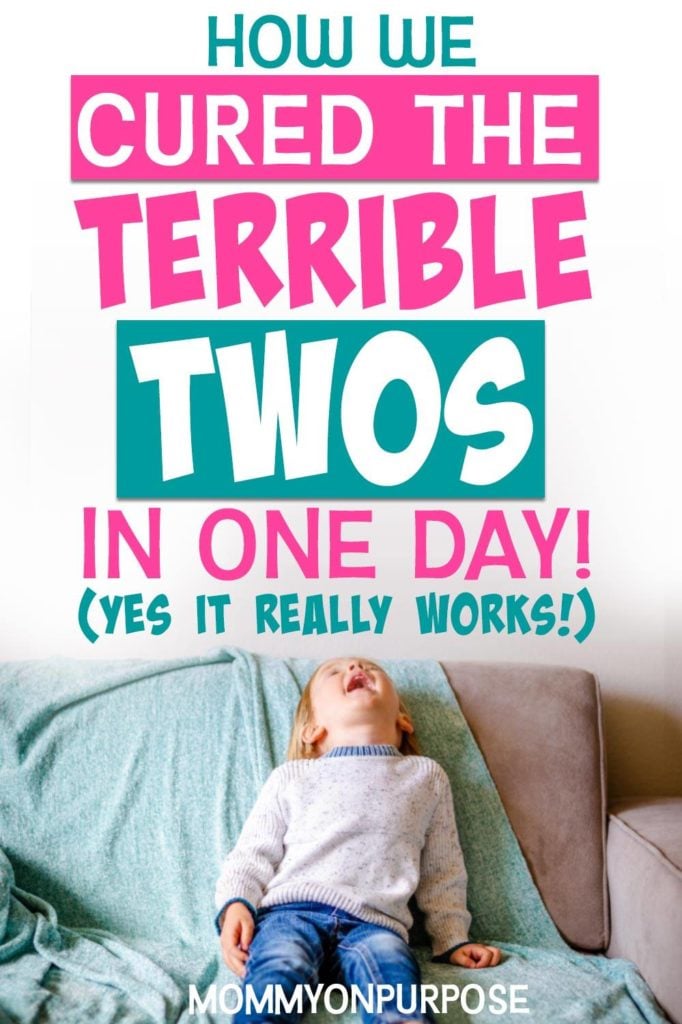 SUBSCRIBE AND I'LL SEND YOU MY PIN TEMPLATE STARTER KIT: 11 GORGEOUS PIN TEMPLATES, MY PERFECT PINS CHECKLIST, AND SOME OF MY BEST TIPS THAT YOU CAN IMPLEMENT FOR BETTER PINS IMMEDIATELY.
you can unsubscribe at any time
7197 shares