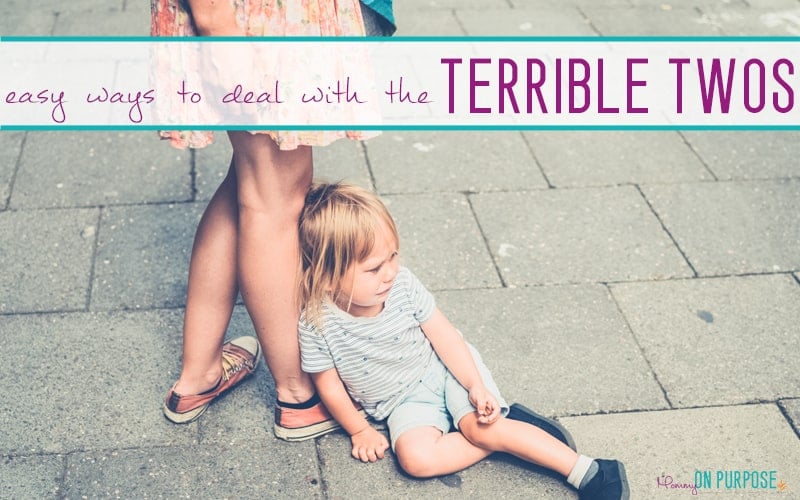 If you have a two-year-old (or a one-and-a-half-year-old, or three-year-old…) you’re probably no stranger to the “terrible twos”.

You know – that defiant, unreasonable, emotional (and exhausting) stage that most preschoolers seem to go through at one point or another – generally sometime between one and three years old.

And if you google it, you’ll find that it’s a normal developmental stage (source), and it’s mostly about toddlers struggling to express themselves and trying to assert their independence, according to most of the experts.

You’re probably also no stranger to the absolutely defeated + helpless feeling of trying to control (or at least reason with) your screaming flailing pile of frustrated kid.

So is there anything you can do to make the terrible twos less… terrible?

I really doubt that the majority of what we see being called “terrible twos” is actually developmental at all.

Sure, kids this age DO want to be independent, and they DO struggle to communicate their feelings – anyone with some common sense can understand – and agree with – those things.

I don’t think so.

I have a two-year-old and most of the time, he’s not “terrible” at all.

And when he is?

It’s generally MY fault as the parent.

We are likely not meeting the needs of our toddlers when they are acting “terrible”.

(Even particularly strong-willed kids can benefit from the following considerations.)

7 things that can help make the terrible twos less terrible

I think the most common overlooked reason for the terrible twos is diet.

I shared recently how our super chill kid was transformed into a tiny rebel when we potty trained with chocolate treats, and removing the treats from his diet changed him back into the awesome and fun toddler he was before – OVERNIGHT.

Sugar is like a DRUG for kids. (Well, for adults too, but that’s another subject.)

Try removing sugar from your toddler’s diet – and be aware that almost everything pre-packaged contains sugar. (Including things like canned soup or ketchup. It’s easy to think your toddler isn’t having much sugar because you aren’t giving them cookies or juice… but that’s probably not the case.)

Related: How to Get a Toddler to Eat Vegetables
Related: Meal Ideas for Picky Toddlers

2. Make sure they are getting enough sleep

Signs of overtiredness in toddlers include tantrums, rejecting food, fighting with playmates, and allllll the other “symptoms” of the terrible twos as well.

Toddlers need 11- 14 hours of sleep (depending on the kid), and many toddlers don’t get enough because they start to fight the nap… and parents – feeling helpless about how to MAKE them nap – just let them win.

I am far more stubborn than my toddler, and even on the rare days when he’s protested nap for 2 hours or more, I STILL win. Because I am the mom.

If your toddler doesn’t nap for day or two, don’t take that to mean they are “done with napping”!

Be persistent – if your child’s attitude changes due to lack of sleep this usually means they still need a nap (source).

And make sure they are getting enough sleep at night. Toddlers should be getting around 11-13 hours of sleep in a 24-hour period!

(Here’s help for if you can’t get your toddler to say in bed!)

Related: Why Our Two Year Old Goes to Bed “Late”

3. Be conscious of their daycare situation

Avoiding daycare is my single most urgent reason for choosing to work from home.

I know that this is a sore spot with a lot of parents, probably because they feel like their hands are just tied on this point.

But the fact of the matter is, both poor quality daycare and long hours in daycare are shown to affect child behavior (source).

If avoiding daycare is impossible for your family, but your child is acting “terrible”, at least assess the quality of the daycare provider – and consider trying a new one.

Here’s more on the signs of a bad daycare provider.

4. Be consistent – both with your actions towards them and with their routine

Consistency – both in your actions/reactions to your toddler AND in your day to day routine will help deal with the terrible twos.

(I am the farthest thing from type-A you’ll ever meet, and routine is a four-letter word in my world. But even I can see that the structure and predictability from a routine helps my kiddo feel calm and gives him some semblance of control over his world.)

Victoria Manion Fleming, PhD, a child and family therapist in Northbrook, Illinois says “Your child needs some consistency to her day, a predictable sequence that lets her explore the world without worry.”  An awful lot is changing in your child’s world. Her language, social, and motor skills are developing rapidly. And while these are all good things, this rapid-fire period of learning can easily overwhelm a toddler (read more).

If your toddler knows what’s coming next, there’s much more chance that he’ll accept it.

At naptime, for instance, I put the baby to sleep while my son watches 15 minutes of his favorite TV show and eats his snack. When I come out of the room where his sister is sleeping, he knows it’s his nap time.

He knows it’s time for nap, he knows he’s never won with “I don’t want to go to sleep” before, and I believe he knows he won’t win this time either… so it’s just not worth the fight.

So we go to sleep – and it’s interesting that often before he falls asleep he likes to list the things we might do AFTER nap – things we do daily, as though it’s comforting to him to know what’s next.

As for consistency in the way you react to your toddler, it doesn’t take a PhD to realize that if your kid thinks he can push the boundaries and get away with something, he will.

If you show your child that certain things are not allowed no matter how many times they test you, eventually, they will see there’s no point in testing you.

Having a few simple concrete rules you don’t give an inch on can make a huge difference (read more parenting tactics for toddlers here).

5. Give them your attention

Another point on this list that’s gonna make some parents cringe – myself included.

It is SO easy to pay more attention to our phones than our kids, to get wrapped up in thinking we need to check every item off our to-do list BEFORE we make time to sit and play, to de-prioritize our kids.

I think that some of the terrible-two-ness we see is just our kids begging for our attention.

Make time to sit with them and read.

Get down on their level and have whole conversations about things that are important to them, or about new things they’re learning.

6. Let them do the thing (and give them choices)

It makes her happy.

Just like it’s not hurting anything to let them turn on the lights, or dump the flower into the muffin mix, or play with the pots – we sometimes have a reflex reaction of NO – when no is totally unnecessary.

7. Discipline them / Don’t LET them win

In contrast to the above, DON’T let them do the thing.

You’re the parent, you decide what’s acceptable and what’s not.

This seems like a given, but it’s easy to see that discipline is being overlooked in a lot of cases.

I’m not saying you need to embrace spanking if you’re not comfortable with it, and I definitely don’t think you should discipline in anger, but there is absolutely a place for discipline in toddler-hood.

We have a bench in our porch, and our toddler knows that sitting on the bench all by himself is no fun.

Time-outs are very effective for my son – and I got to try them today with my daughter for the first time.

Today I could SEE that she was exhausted and needed a nap – but every time I picked her up to snuggle her, she kicked me or pinched my nose, and every time I tried to lay down by her on the bed she stood up and got off it.

So finally, I told her I would have to leave her in the room alone if she wasn’t going to go to sleep – kids understand A LOT more than we think they do – and I closed the door and went out.

She screamed frantically and I let her – for 3 minutes.

Then I went back in, picked her up… and she started thrashing around again.

So I put her down, and let her scream alone in the room – for 4 minutes.

And when I went back in and picked her up, she put her head on my shoulder and went to sleep.

I have a feeling time-outs are going to be just as effective for her as they are for her brother! (Yay!)

I also have a feeling that after a couple of days of this little routine, she won’t bother fighting me at nap time anymore.

If you feel overwhelmed and need some guidance on disciplining this is an EXCELLENT book on the subject.

SUBSCRIBE AND I'LL SEND YOU MY PIN TEMPLATE STARTER KIT: 11 GORGEOUS PIN TEMPLATES, MY PERFECT PINS CHECKLIST, AND SOME OF MY BEST TIPS THAT YOU CAN IMPLEMENT FOR BETTER PINS IMMEDIATELY.
you can unsubscribe at any time
110 shares