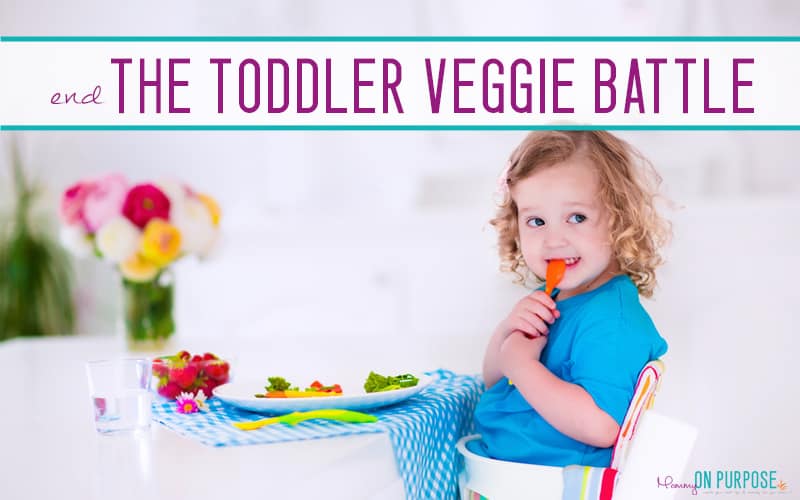 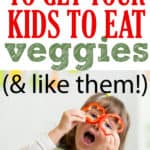 Like all parents, I was a much better parent before I had children. I knew exactly how I would teach my baby to sleep, I knew I wouldn’t have a problem going without screen time, and I knew how to get a toddler to eat vegetables (ummm, you just make them do it!) – and all would be well.

Once I became a parent, I learned a lot of things… like the fact that actually making your toddler eat vegetables can be about as easy as making your cat wear pants. Some things just don’t feel worth the battle… but as a parent, I want the best for my kid, and that includes wanting him to be healthy.

I am a BIG believer in food as medicine, food as prevention, and also as food as poison.

Food as poison sounds terribly strong, I know, but really – that’s what sugar and processed grains / empty carbs are. Don’t get me wrong – we eat the stuff. I just can not allow my child’s diet to be 75% crap.

I just can’t. I’m also a really big believer in poor diet being a cause of children acting out, and sleeping poorly. Our bodies just weren’t designed to function well on the processed stuff we reach for automatically. I know my whole life is better when I eat well, and I want that for my kids too.

So I’ve found some great methods for getting my toddler to eat vegetables – everything from sneaking veggies into toddler food to making vegetables and fruit more appealing to him.

How to Get a Toddler to Eat Veggies

First, I just want to add that while some of these suggestions are “sneaky”, I’m not at all suggesting we stop offering our kids vegetables right out on their plates, in the open… or that we stop flat out insisting they eat them. They DO need to learn to like veggies eventually… and we can’t just allow them to make all the rules.

We still need to parent, and teach, and retain our status as the mom-boss (that’s our job), but at least this way if you are just exhausted and settle for a “win” of 2 bites of broccoli, you can still know that they’ve gotten some veggie nutrition into their bodies.

Related: How to Feed Your Toddler Without a Fight

My hands-down absolute favorite way to get real veggie nutrition into my toddler (he’s two) is juicing.

I bought a juicer back when my husband was first diagnosed with colitis, and we were needing to work on his nutrition. Juicing was recommended by our naturopath and it is so easy.

(Not all juicers are created equal and you want one that gets ALL the juice out and is also very easy to clean. If it’s not easy to clean, you won’t want to use it daily. This is the one I bought after a ton of research. It’s excellent.)

Recently, I started juicing for our toddler.

We have never given him juice – as in, apple or orange or any store-bought concentrate juice – so this was absolutely NOVEL to him. And he loves being part of the process. Each evening he stands in the kitchen and points at the juicer and requests “Juice? Juice? Make Juice?”

It’s absolutely adorable and it’s a fun 10 minutes that we spend together. He sits on the counter next to me as I wash the veggies and get them ready to juice, and chatters away about apples and carrots. It’s a nice break from the routine of the rest of our day.

And he LOVES the veggie juice. He drinks a whole glass and then asks for more – without fail. (He doesn’t ever finish the second cup, but I sure don’t say no! I just re-fill his glass, and then I drink whatever he leaves behind.)

I use a standard base of carrots, celery, and apples – but then I mix in other things during the week too. Beets, spinach, lettuce, cucumbers and kale work great in juice.

It’s amazing how many vitamins and minerals are found in veggies, so I know my kiddo is getting all kinds of goodness this way, and he is REQUESTING this… so there is zero battle.

Does my child know he eats a whole handful of spinach in his morning “shake”?

And what else is in there?

Honestly, whatever you want.

(For easy on-hand ingredients, companies like The Frozen Garden and Daily Harvest can help. They’ll ship you frozen, pre-portioned smoothie ingredients so you can just blend and enjoy.)

hide vegetables in food for toddlers

This is downright sneaky, but honestly, what they don’t know won’t hurt them – when it comes to eating vegetables anyhow.

Here’s just a few ideas to hide veggies in food for toddlers:

My kiddo loves to “dip” things – and raw sugar snap peas or carrot sticks are no exception.

He’s not particularly interested in eating either on their own, but when I offer him a bowl of hummus or ranch dressing to dip them in, he’s game.

I often need to remind him to bite the pea too, but I’ve found this isn’t because it’s a veggie. Without a reminder, he just licks the dip off a cracker as well. It’s more about a love of dip than a hate of veggies it seems.

Yes, this is a thing, and adults will love it too!

Our favorite is chocolate avocado pudding – which is soooo simple – just mash a ripe avocado with coco powder and maple syrup.

We also like zucchini brownies and chocolate beet cake.

So, for my babe, this is steamed green beans with butter. Or steamed broccoli with cheese.

I noticed that he would eat these things sometimes… but only sometimes. Only when it wasn’t on the plate with something MORE appetizing.

So I started making beans or broccoli with meals I knew he didn’t love. (Basically anything meat that isn’t breaded. He has some weird issues with meat.)

So far, this has been pretty successful. The other night he ate all his green beans and nothing else.

To be honest, I didn’t like this one when I first heard it.

I don’t think of breaded foods as healthy foods – our family is largely grain free (but not 100% gluten free, so I DO use flour to thicken things occasionally, and I have it in the house). We more or less stay away from bread based foods.

But, I read this article from an occupational therapist who makes some solid arguments for getting kids to try new foods (or eat veggies) by BREADING them.

Give it a shot!

(In the past, I have shake’n’baked veggies also – that is EXCELLENT, adults like them too. Mushrooms are the best!)

Honestly, I know the importance of veggies – and I still choose to eat a hamburger over coleslaw at a bbq.

Sometimes it’s just easier to get kids to eat veggies if there isn’t any competition. We put babe at the table with a few veggies before we bring out the rest of the food, and he often munches on them while he waits.

We sort of thing of veggies as the “first course”. I kid you not, last night he ate a plate of steamed green beans with butter and salt… before I even mentioned that there was a beef and gravy pie coming.

It helps if we ALL sit down with a plate of veggies, too. We try not to talk about how weird it is, just sitting there eating a plate of steamed green beans only, and we just talk about how great the beans are instead.

Look, I’m not entirely proud of this one.

But I bet I’m not the only parent who resorts to bribery or “rewards” to get your kids to do the things you want them to do.

I stumbled on this one by accident… but if I allow my son to watch TV while he eats his veggies, I can get him to eat MULTIPLE SERVINGS, in ONE SITTING.

Finally, let them get hungry

But, there’s NOTHING wrong with saying no to snacks the hour or even two hours before dinner.

My kids always eat better in general when they haven’t been snacking all afternoon.

I know it’s tempting to placate them with a snack while you’re trying to cook and their needing your attention… but if you can resist, it’s far more likely that they’ll eat whatever they’re given.

Related: How to Get Baby to Eat More Veggies

What do you do when your toddler won’t eat veggies? Do you have some mom tricks I need to know about? 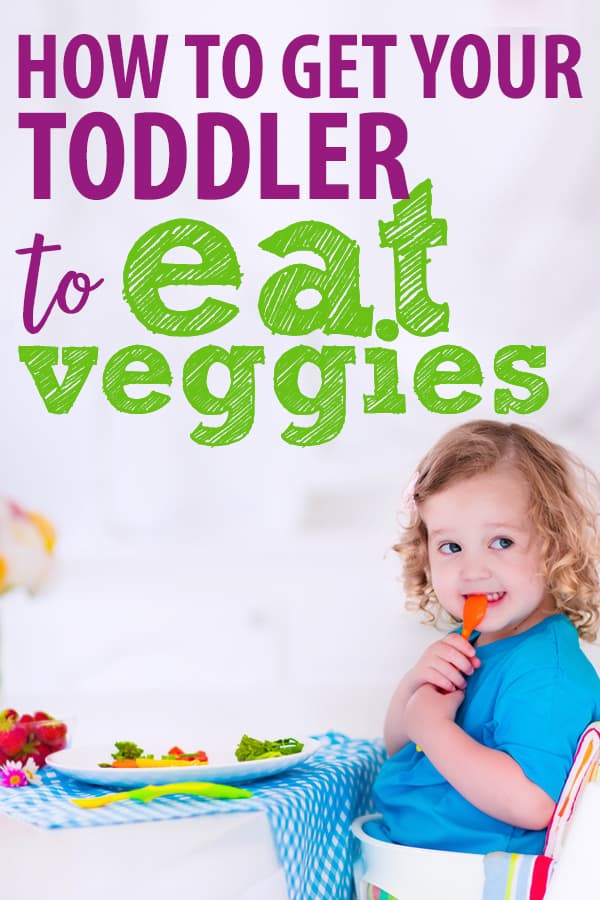 SUBSCRIBE AND I'LL SEND YOU MY PIN TEMPLATE STARTER KIT: 11 GORGEOUS PIN TEMPLATES, MY PERFECT PINS CHECKLIST, AND SOME OF MY BEST TIPS THAT YOU CAN IMPLEMENT FOR BETTER PINS IMMEDIATELY.
you can unsubscribe at any time
2246 shares