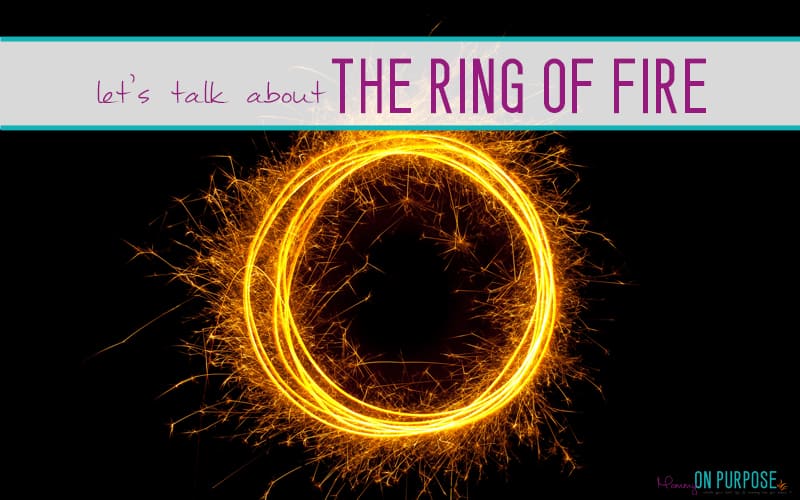 I think I was maybe 16 the first time I heard someone describe the “ring of fire” in childbirth.

She had just had her baby a few days before, and was describing the pain to us – she held her hands up with her fingers forming a circle and said – “you know … just… FIRE. Like, burning.” (I can still picture the conversation in my mind!)

And I’m a high anxiety sorta girl, so it stuck with me.

Even though I didn’t have my first baby until I was 30 (so…. almost a decade and a half later), you could say I was scared crap-less going into labor.  The pain of childbirth, in general, was anxiety including for me, but during the 9 hours I labored before I started pushing, the ring of fire was definitely on my mind.

Even while I was packing my hospital bag, I was worried about the ring of fire sensation…

Would it be the worst pain I had ever experienced?

Well, now I know the answers…

And there’s a couple of things I wish had been part of that first conversation that I KNOW could have made the whole thing less scary – and I want to share them with you now… but first, just in case you don’t know:

What is the ring of fire in childbirth?

It’s the feeling created when the baby is crowning – when it’s head is pushing on the vaginal opening – and stretching the tissues there.

And why is it called the ring of fire during childbirth?

Because it’s a burning sensation happening all around your vaginal opening (so it’s a circle, or a “ring”).

(Honestly, you can get a “sort of” idea of what this feels like by stretching your mouth open as widdddddde as possible- use your fingers in each side of your mouth  to stretch it farther – only, know that whatever you come up with that way- the ring of fire in childbirth IS worse.)

This doesn’t generally happen early in labor – I mean, unless your baby is coming VERY fast.

The ring of fire usually comes right before baby makes his appearance  –  USUALLY. (I’ll explain shortly how that was NOT the case in my first delivery!)

It also USUALLY only lasts a very brief time.

If you have an epidural, there’s a good chance you won’t feel it at all, because everything is numb. (Thinking about the ring of fire is the reason I always thought I wanted epidurals in labor when I was younger.)

I did not, however, have an epidural for either of my deliveries, so I can tell you all about it!

Can you avoid feeling the ring of fire in childbirth?

Well, yes – with a successful epidural that’s still in effect when your baby is born, you can avoid the ring of fire in childbirth.

I had a few intravenous drugs and laughing gas only (no epidural)… and those things DO NOT prevent you from feeling the ring of fire.

There are also some that claim you can lessen the sensation by doing perineal massage prior to giving birth, or having your baby in the water, or using oils (honestly I’m not even sure what you should do with the oils… rub them on there? It wasn’t for me. lol)

HOWEVER, don’t let wanting to avoid the ring of fire dictate how you tackle labor and delivery. You do NOT have to be so afraid of it that you opt for an epidural, and it is likely not going to be the worst thing about labor either.

If it IS the worst thing for you about labor, it will probably be short-lived, and by the time you experience it, you won’t even care that much. You will just be so excited to be DONE!

The thing that helped me get through the ring of fire

Shortly before I went into labor, I read somewhere that the ring of fire means your baby is trying to get out, and your vaginal tissues are either stretching or tearing (those are really the only options we have!)… and that the LONGER you feel a burning sensation, the more likely it is that you are STRETCHING rather than TEARING. (This was one of the best labor tips I ever got!)

If you approach the feeling like it is something that is benefiting you rather than causing you damage, I swear, it makes it easier to live with.

It hurts – yes – but it DOES NOT hurt any worse than everything else you’ve been through up to this point, so you CAN do this.

With my first baby, I felt the ring of fire and I thought “OH, that’s what that feels like!”

And it was awful – but I was very aware that I didn’t want to tear, so I embraced it and I focused on how the feeling was allowing my body to stretch, so my baby could come out WITHOUT tearing.

I let the ring of fire happen… and went slow. Instead of fearing it, I embraced it!

When all is said and done, the more you embrace the ring of fire, the less likely you are to have damage from childbirth – which makes the healing time postpartum so much faster. When you have tearing and stitches, even simple things like peeing after giving birth are awful!

With my SECOND baby, I felt the ring of fire, tried pushing… and didn’t like the way pushing intensified the fire… I thought “ugh that hurts”  and so I QUIT PUSHING – and my baby just came out on her own two natural contractions later.

(I know. It’s crazy. I’ll tell you that story another day.)

I WISH I had known before labor that the ring of fire isn’t the worst part of labor, and I am SO GLAD I knew to embrace it and focus on how it is HELPING me.

Remember, when you feel the ring of fire in childbirth, it means it will all be over* soon! 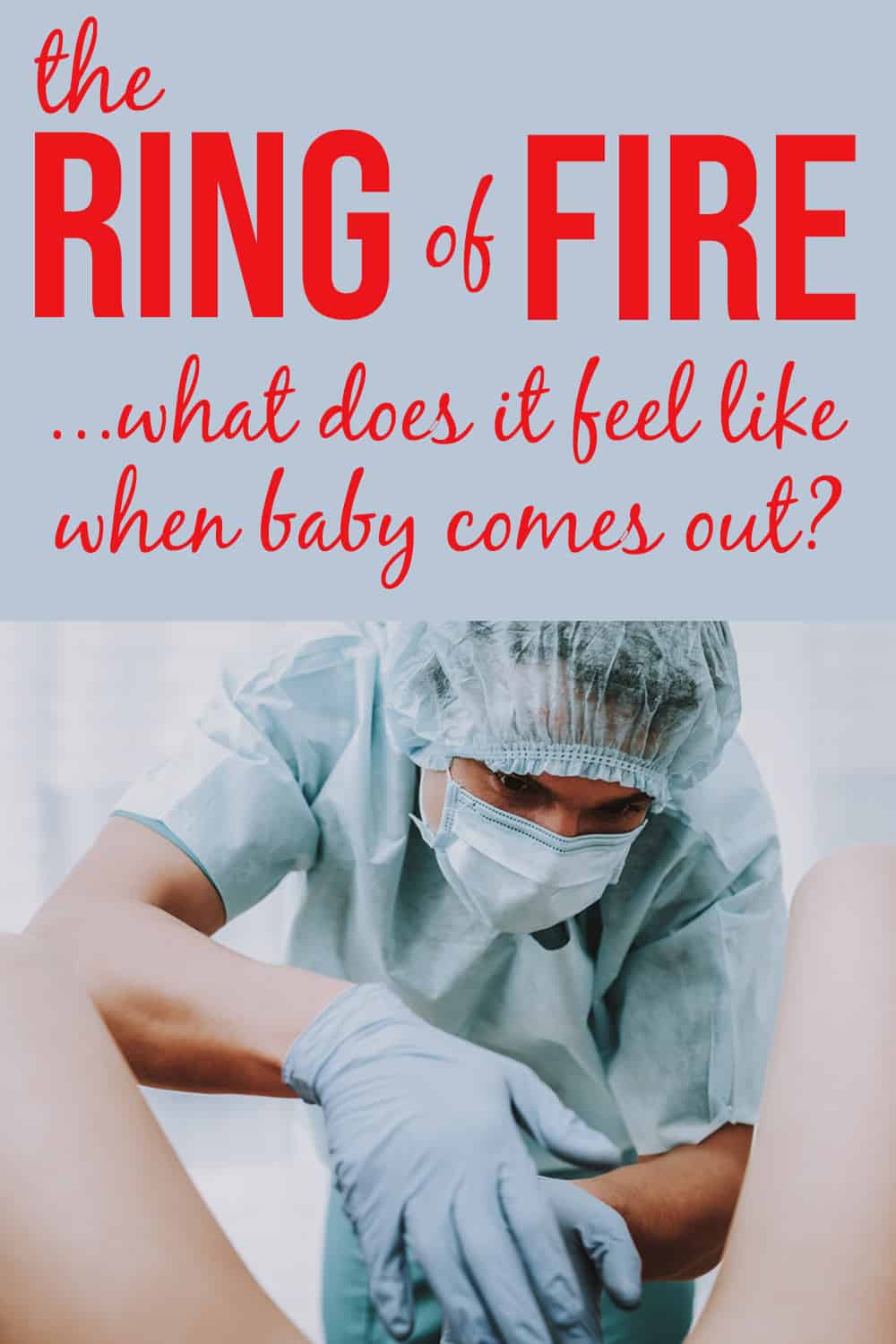 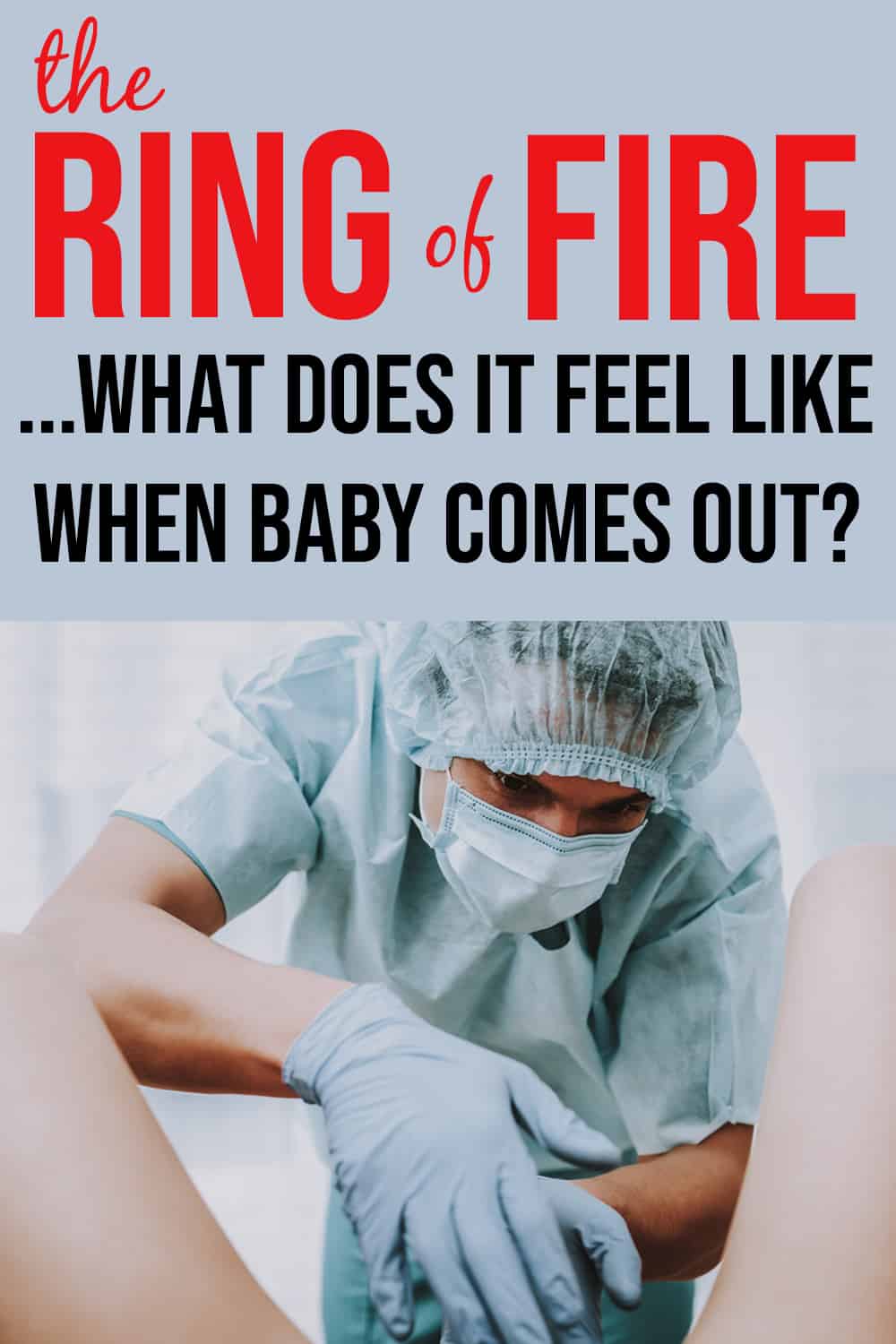 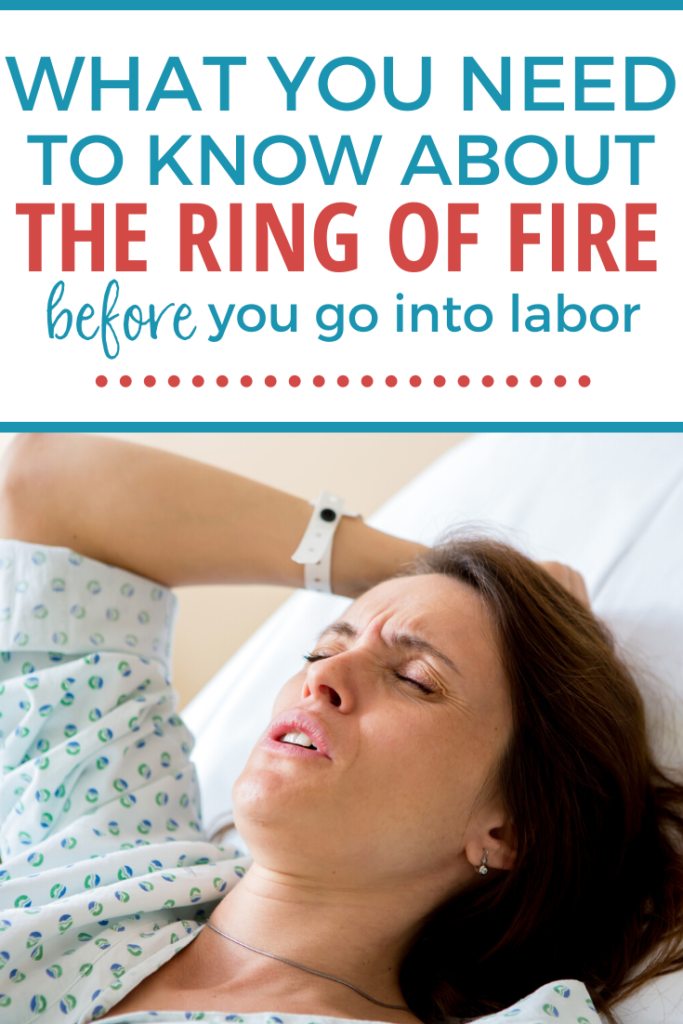 SUBSCRIBE AND I'LL SEND YOU MY PIN TEMPLATE STARTER KIT: 11 GORGEOUS PIN TEMPLATES, MY PERFECT PINS CHECKLIST, AND SOME OF MY BEST TIPS THAT YOU CAN IMPLEMENT FOR BETTER PINS IMMEDIATELY.
you can unsubscribe at any time
239 shares