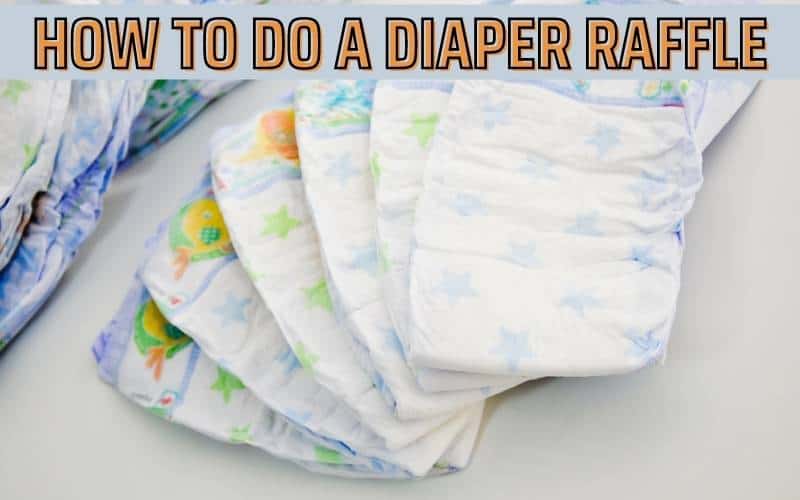 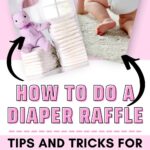 Diapers are one of the most important (and expensive!) things new parents need plenty of. And if you’ve been a parent yourself, you know just how much pressure it takes off to have a stockpile of diapers in the house! When you throw a baby shower for a friend or family member, it’s a wonderful opportunity to provide them with a supply of diapers to see them through the first few months (or even the first year). How do you do it? By holding a diaper raffle, of course!

Diaper raffles are becoming a very popular fun game for baby showers (and baby sprinkles), for good reason – EVERY NEW PARENT makes use of diapers!

If you’re loving the idea, but not quite sure how to do a diaper raffle, we’ll explain everything. Below, you’ll find printable diaper raffle tickets to include in the invitations, tips on setting up a diaper raffle for a baby shower, and some terrific diaper raffle prize ideas to give to your raffle winners. 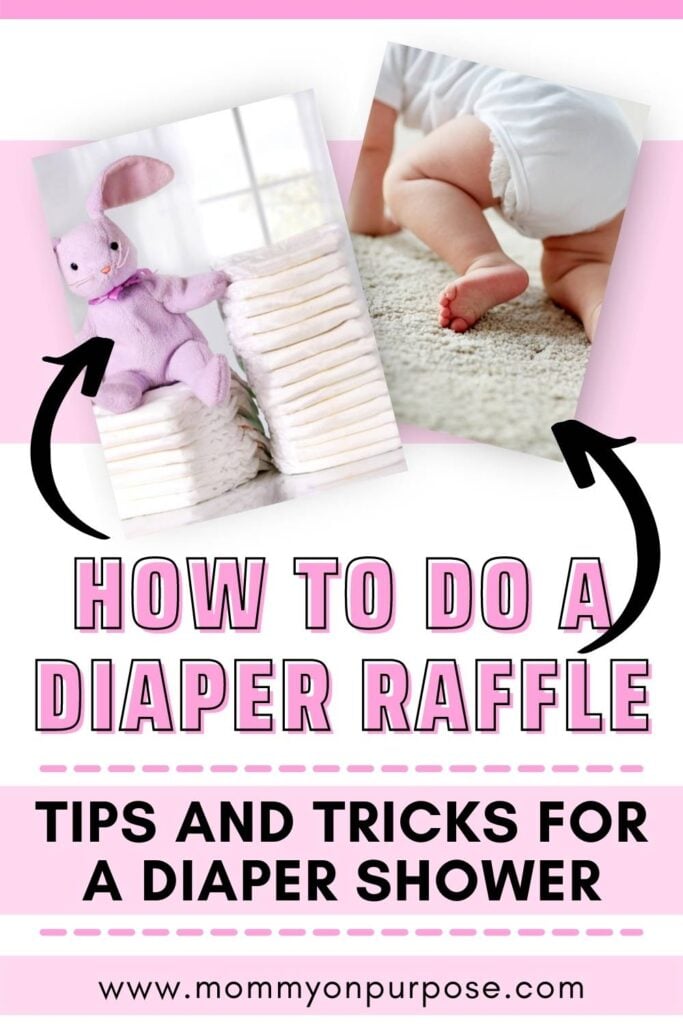 What Is a Diaper Raffle?

A diaper raffle is a game (or fun activity) played at a baby shower, baby sprinkle, or a gender reveal party.

In a nutshell, every baby shower guest who brings a pack of diapers gets an entry ticket for the raffle.

Before the end of the shower, the mom-to-be draws a winner from the tickets and gives the winner a prize. It’s a lot of fun!

What’s the Point of a Diaper Raffle?

Diapers are great gifts for new babies! Expectant parents have so many expenses in the first year of a baby’s life. Providing diapers for them helps ease the financial burden a bit. The diaper raffle provides the family with enough diapers to last several weeks or months and saves them a ton of money.

It’s also a helpful way for new parents to figure out which brand of diapers they like best if they haven’t specified a brand preference already.

Perhaps the biggest benefit for guests and parents alike is that you’re giving them something that they’ll actually use and appreciate.

Can You Do a Diaper Raffle With Cloth Diapers Instead?

Sure! There’s no rule saying that a diaper raffle can only be held for parents who want to use disposable diapers. If the new mom wants to use cloth diapers, ask guests to bring diaper covers and inserts instead.

(I would just confirm that mom does in fact WANT to do cloth diapers – this was not something I wanted for me, and I would have much appreciated disposables!)

How to Do a Diaper Raffle for a Baby Shower

Arranging a diaper raffle is super simple. Most guests will already be familiar with the concept.

To get started, you’ll need to:

How to Host a Virtual Diaper Raffle

Things have changed a lot the past couple of years, and some mamas may prefer a virtual baby shower.

In that case, hosting a virtual diaper raffle is super easy and a fun way to get much-needed diapers to the expecting mom. Simply put all the names of those who sent diapers in a jar. Mom draws a winner via live video. It’s a lot of fun! After the virtual shower has ended, mail a prize to the diaper raffle winner.

A diaper fund is another fun idea for a virtual baby shower. Instead of sending diapers, guests can send the expecting parents money via PayPal, Venmo, etc. to buy diapers with instead. 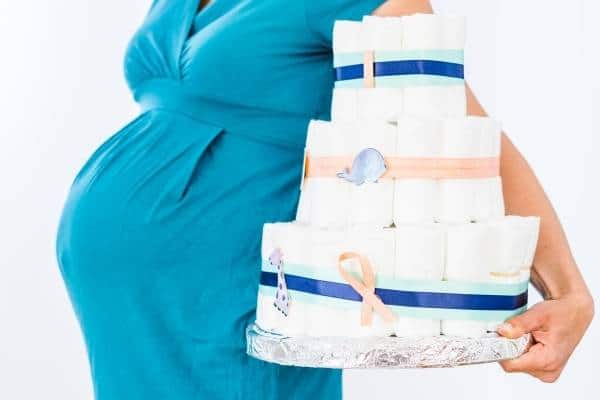 Want to make your own diaper raffle tickets or write a quick note to include on the invitations? Here are some simple wording ideas to get the point of this fun activity across to your shower guests. The phrasing doesn’t have to rhyme; it can be straightforward.

Make sure you include any preferred brands or types of diapers (cloth vs. disposable) if the parents want specific diapers. 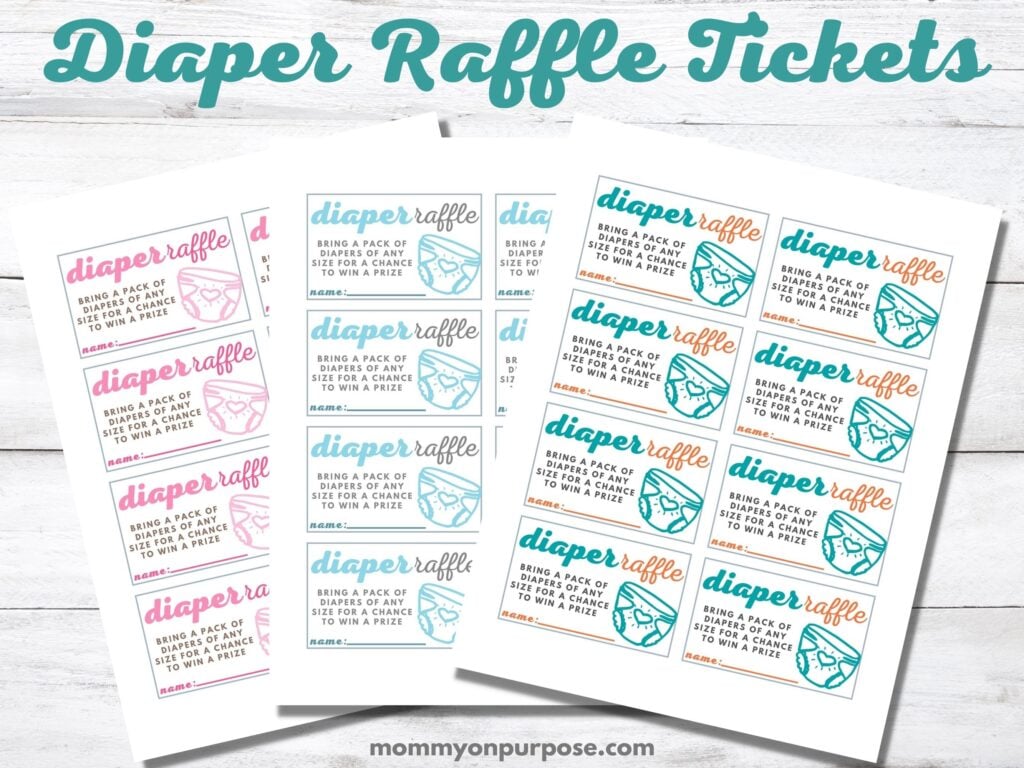 Do the new parents have a particular brand of diapers they’d like for the baby? Just include it on the raffle tickets or on the invitation. It’s as simple as saying, “Mama prefers Huggies” (or Luvs, etc.).

(I found that huggies lil’ snugglers were THE answer for our kids, where as I have friends that prefer pampers. It’s a very personal thing lol.)

How to Get Diapers in Multiple Sizes

Using the wording that we’ve included on the printable diaper raffle tickets is a great way to get diapers in multiple sizes. However, if you’d like to ensure a good variety of sizes, request specific sizes on various tickets. For example, ask 5 people to bring newborn diapers, 5 people to bring size 1, and so on.

You can also ask guests to include a gift receipt with their diapers in case the parents want to exchange them for a different brand or size.

How to Set Up Your Diaper Raffle Table

When you host a diaper raffle, it’s a great idea to have a dedicated table for the game at the baby shower.

Add a framed diaper raffle sign to the table so guests know where to drop off their diapers and tickets. Decorate a box or jar to hold the tickets with the guests’ names. You may also want to put the prize(s) on the table as well for the guests to see.

Don’t forget a pen and extra tickets in case someone brings multiple packs of diapers or forgot the ticket included in their invitation.

We don’t recommend stacking the diapers on the table. The diaper packaging may clash with the shower decor. Instead, tuck the diapers under the table or set them aside somewhere.

How Many Raffles and Prizes Should I Have?

For a small baby shower with 10 people or fewer, have one diaper raffle grand prize. Showers with up to 20 guests should offer two prizes. If you have more than 20 guests, three baby shower prizes is a good idea to keep the momentum going during the party. Draw a name before the baby shower games, before the food is served, and again before the end of the shower.

What Should the Baby Shower Diaper Raffle Prizes Be?

Picking out a great prize for the lucky guest is such fun! There’s no rule about the value of the prize, but it should at least equal the cost of an average pack of diapers. You can’t go wrong with any of these ideas:

Consider telling the guests what the prizes will be beforehand so they’ll be encouraged to take part in the raffle. It’s the best way to get lots of diapers for the parents-to-be!

How Do You Select the Winners?

To select the raffle winners, ask the new mama to draw a name from the entries.

The first name drawn gets the grand prize. If other names are drawn, you can award them smaller prizes.

Grab these free printable diaper raffle tickets to include with your shower invitations.

For best results, print at actual size on cardstock. Trim with a paper trimmer for super neat lines. Scissors work, too!

Now that you know how to do a diaper raffle game for a shower, you may want to check out these other baby shower tips! 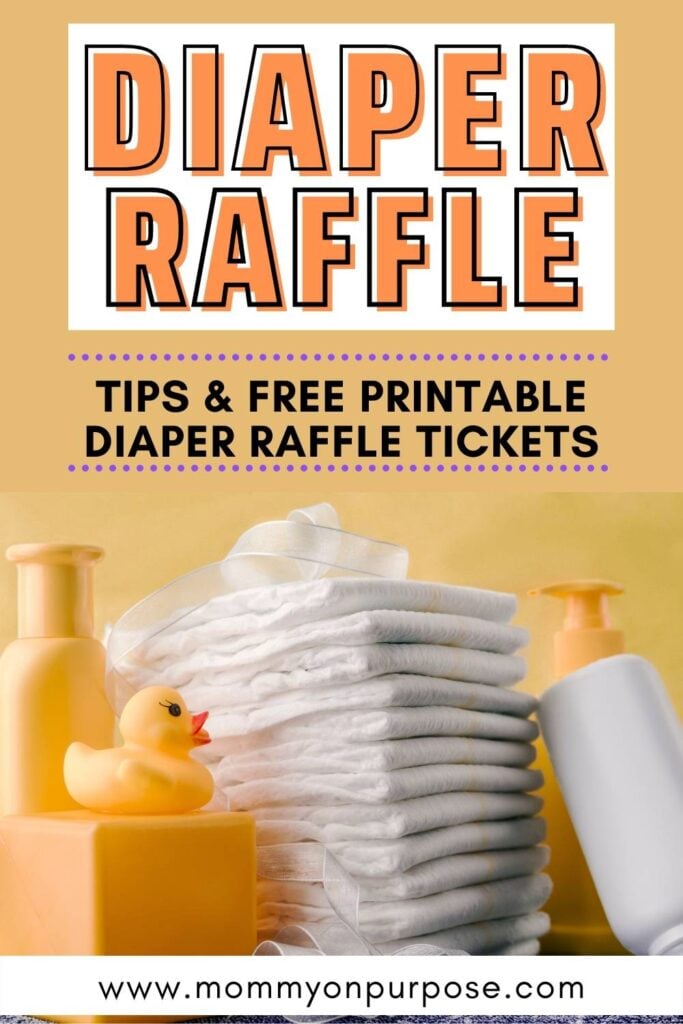 SUBSCRIBE AND I'LL SEND YOU MY PIN TEMPLATE STARTER KIT: 11 GORGEOUS PIN TEMPLATES, MY PERFECT PINS CHECKLIST, AND SOME OF MY BEST TIPS THAT YOU CAN IMPLEMENT FOR BETTER PINS IMMEDIATELY.
you can unsubscribe at any time
14 shares