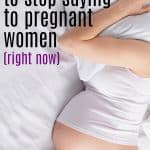 I’d be lying if I said I missed being pregnant.

(I wrote this after my first pregnancy, and never shared it. As I’m wrapping up my second pregnancy, and feeling ABOUT as awesome as I did at the end of the last pregnancy – but with a toddler to chase on top of that, it feels good to publish a little sarcasm.)

People used to tell me I’d miss it. I was pretty sure they were wrong… and it turns out I was right about them being wrong. (I thought I might miss feeling the baby moving, but if we’re totally honest, I like hugging him outside of me now even more, so I don’t even miss that.) I did not like being pregnant. Being pregnant is really, really hard sometimes.

For months I was sick, and couldn’t find ANYTHING that sounded like food. Then I had to pee. Every 12 minutes. I developed some sort of post nasal drip that irritated the bananas out of me and kept me awake at night, and I couldn’t take anything for it. My husband had to sleep in a different room because I cleared my throat so often at night he couldn’t sleep. Then my back started to hurt – and it never stopped hurting. Debilitating pain. I laid on the couch and cried. My whole body was uncomfortable. I had pregnancy anxiety. I ran out of clothes that I could wear in public.

Related: How to FINALLY get some sleep while pregnant

I realized, somewhere at the beginning of the 8th month, that if one more person said “sleep now while you can!” – with an obnoxious wink – I might just deliver the baby in prison.

Things I will never say to a pregnant woman – because they are either not true, (or they are true – but I don’t want to be beaten with a stick)

They would say – “Sleep now while you can!”

And I would think – “If could sleep now I would, you moron.”

Being reminded (when you’re already dead tired) that you have three years of sleepless nights ahead is NOT helpful OR funny. And EVERYONE says it… EVERYDAY. It is old. Yes, now that the baby is here I am still dead tired, but “collecting” a bunch of sleep before he got here wouldn’t have helped even if I could have slept.

And I would think – “No, I’m hardly eating for one. All food the is gross. Sure, you might be witnessing me take a third potato, but potato is literally all I can eat – so shut up.”

“No. I am just this large. And I will sit on you and crush you if you don’t shut up.”

Do not comment on a pregnant woman’s eating habits. She’s probably going to throw it all up anyway, and if you provoke her, she might aim at you next time.

Related: Check out this ultimate pregnancy and baby planner!

They would say – “Enjoy some time with your husband before the baby comes!”

And I would think – “My husband isn’t even sleeping in the same bed as me, because I have replaced him with pillows in an effort to get some of that sleep you speak of. Plus I’m working 118 hours per week to try to pad our bank account before I quit work. I don’t even remember what he looks like.”

It’s just plain not helpful to remind a pregnant woman how much her life is going to change. She’s probably already nervous about that stuff. On top of that, perhaps you should prioritize time with your husband! Don’t ignore him just because you have kids.

They would say – “Kids are so expensive…”

And I would think – “Then if you really wanted to be helpful, you’d give me money instead of advice.”

(Besides, it doesn’t have to cost THAT much to raise kids – read this: Preparing for baby on a budget or this 5 ways to save thousands raising kids.)

They would roll their eyes and say – “Well, you won’t have time for that anymore after the baby comes!”

And I would think – “Tell me more about how my life is dissolving into a hopeless pit of nothing but laundry and desperate attempts to make a tiny human sleep…I can’t wait for that!”

They would say – “When I had my first/ second/ third baby my vagina blew up/ got shredded/ fell off completely and there wasn’t even time for drugs.”

And I would think – “Do you want to see me cry? Doesn’t it look like I’m already committed here?”

Those stories aren’t that bad once you’re on the other side of having done it, but it’s impossible to understand that until you do it. For someone staring down their first ever labor and wondering if she’ll ever be normal again down there, these stories aren’t that encouraging (to say the least).

My point is – can’t we be just a little positive?

Maybe I’m making a bigger deal out of it than I have to, but honestly, I wasn’t 100% sure I really wanted to have a baby (- that’s a post for another day). Comments like these just solidified my anxiety regardless that they were meant as jokes (or at least stated light-heartedly).

There’s a good chance that a first-time pregnant woman is uncomfortable and nervous – or at the very least, sick to death of hearing how exhausted she’s about to be.

Say, “Your life is about to change in the most amazing way.”

Say, “Nothing you have EVER done up before will compare with what you’re about to do”.

You don’t have to lie to be encouraging – you could say, “Those first few weeks are hard. But they are totally worth it.”

Or even “Try to remember, at 3 am, that this is the only season of your life where your tiny little baby will need you like this. Between the yawning and the crying (the baby is crying, you’re crying), take a moment to just hug him and enjoy him. Because this season will pass all too soon.”

Related: The baby sleep tip that will change everything

It would be great if more people would tell first time moms that this will be the best thing they will ever do in their lives.

(And maybe it wouldn’t hurt to mention that even if your vagina DOES fall off, it grows back. 99% of the time. Because you know. That’s a real fear.) 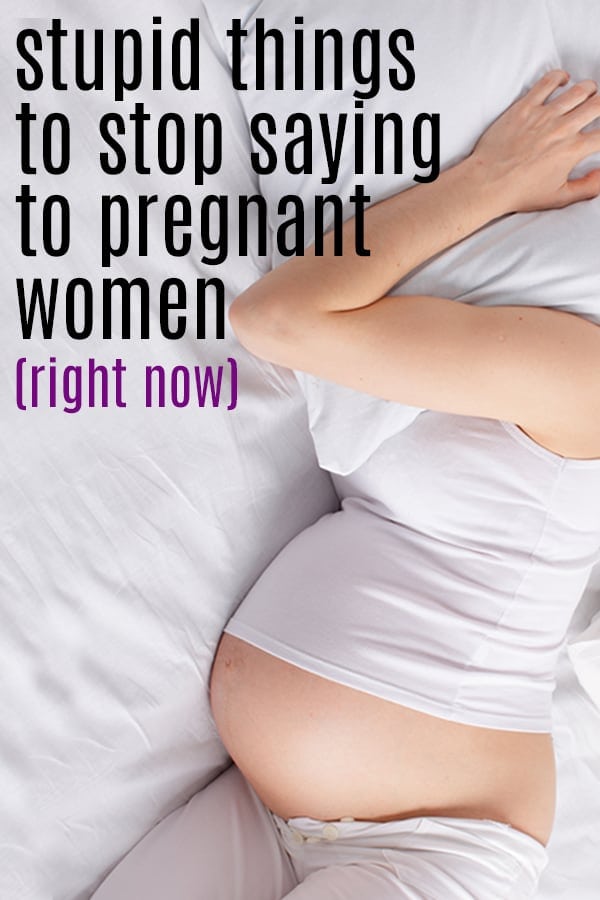 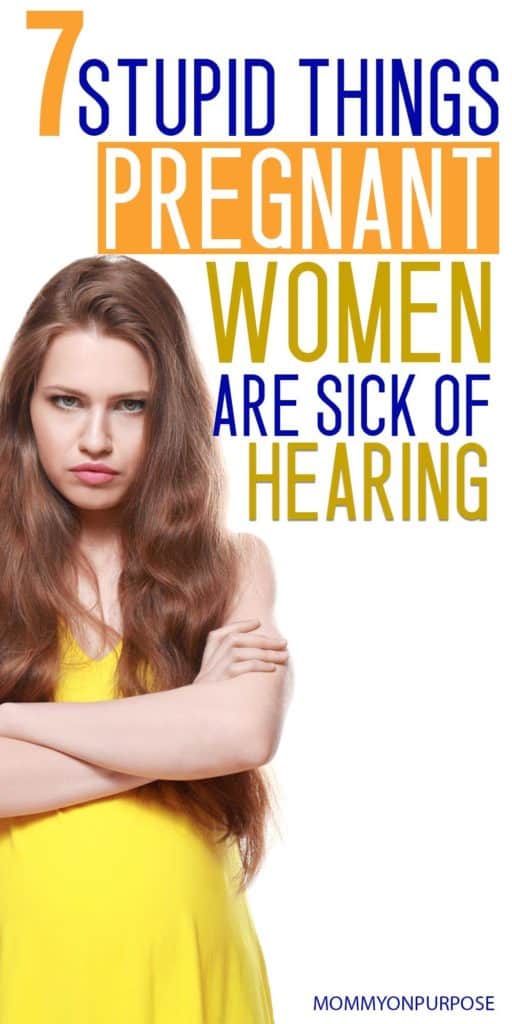 SUBSCRIBE AND I'LL SEND YOU MY PIN TEMPLATE STARTER KIT: 11 GORGEOUS PIN TEMPLATES, MY PERFECT PINS CHECKLIST, AND SOME OF MY BEST TIPS THAT YOU CAN IMPLEMENT FOR BETTER PINS IMMEDIATELY.
you can unsubscribe at any time
1838shares