11 Important Things To Do In Baby’s First Year 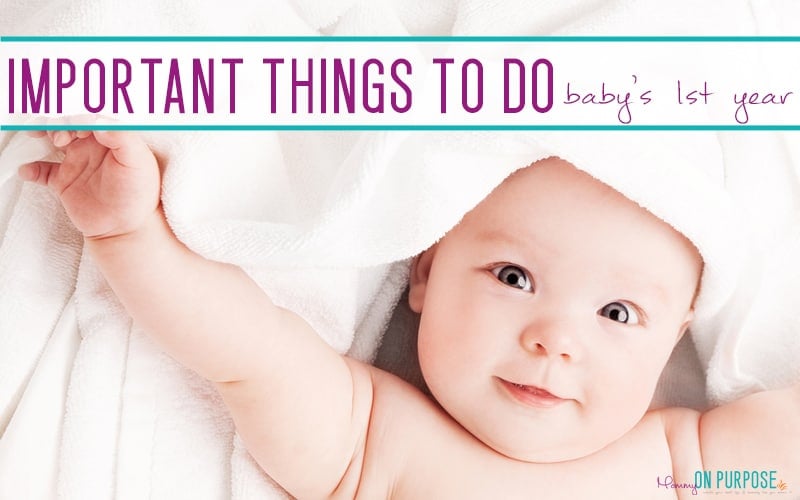 Some of these regrets are minor, like “oh rats, THAT would have been a good thing to do…”, and some are more serious like “I’ll NEVER have the chance to do that again”.

Fortunately, there are also a number of important things you should do with your baby in their first year that I did NOT miss out on.

For busy moms that like point form, here’s the quick list of things to do baby’s first year:

I know not everyone is interested in the “story” or why I did or did not do some things… but here’s my list of things that I think should be on every new parent’s list of things to do the first year with a baby:

Crazy important things to do in baby’s first year:

I DID manage to make handprint and footprint impressions, which are really special keepsakes I think. (You can just do it with a little kit like this.)

And, though we did use mostly second-hand clothes to save money on baby’s first year because they grow out of everything SO fast, we did splurge on a few cute little outfits so we have sweet pictures of our babies.

I had a good number of pictures taken of me with my babies, even though I looked like crap 75% of the time. You will want those pictures of you with your itty bitty baby. You can not take more later.

I also held my kids a lot. I held them to sleep sometimes, I snuggled them late at night while I watched movies. I was working really hard creating my business while my kids were babies, but I knew that I needed to take advantage of this time to just love them. Even though I was careful to make sure I got in a lot of snuggle time, it will never be enough. I still wish there was more time to snuggle them.

Those four things, above, are probably the most important things to me… and that’s why I did them.

If I COULD do it over again, these are a few more important things to do in baby’s first year that should have made my list.

(And I’m not talking about an insane list that will keep you running and make the year an exhausting blur… I’m just talking about a few basic things that would have taken very little effort, but been very worth it.)

Commemorate Milestones (- somehow, any how)

The whole first 9 months of my squishy baby’s life are a crazy blur. I didn’t THINK about taking a monthly milestone picture until he was 3 or 4 months old, and by that time I was so overwhelmed that it didn’t seem important.

I also felt like since I missed the first three months, there was no point. (Which is ridiculous, but postpartum will do that.)

I wish I had commemorated each month of my baby’s first year with a milestone picture.

You can get super cute milestone cards to use in baby month by month pictures, or even a milestone blanket like this (that indicates their age) to lay them on. I personally wish I had gone for something like this milestone chalkboard where you can make a mini record of things that happened that month.

It’s insane how much baby changes in the first year, and you don’t fully understand it until you see it happening… OR how much it will hurt to realize that those days are GONE and you can not get them back.

Related: Remember Mommy; “This Too, Shall Pass”

In the same vein, I wish I had used the Queepsake App. It’s a simple app that prompts you to save texts about the things your baby did that day. It looks like the COOLEST BABY THING EVER!

To be fair, I didn’t ever hear about it until my son was maybe 6 months old, and I again I thought “it’s too late”… plus I had a baby book and I figured I was going to fill it out.

But the postpartum insanity (which was very real) had set it, and I didn’t know it, and the days were turning into weeks and months… and I never did fill out the book.

It breaks my heart a little that I don’t know exactly when he got his first tooth, took his first steps, said his first word, how much he weighed when he was 3 months old.

If I had been using the Queepsake app, I would have all the information now and I could transfer it to the baby book.

Join (and USE) the Huggies Rewards Program

This one is just a common sense thing.

We decided early on that we like Huggies Snug and Dry better than any other diaper we ever tried. They have this extra-absorbent blue layer in them and they were the first diaper we found that finally DID NOT leak and wake our son up at night.

So I have – unless I had no other options – never bought anything but Huggies Snug and Dry.

I heard about the Huggies rewards program early on, but I figured like “how many diapers will I REALLY buy? How much benefit can I REALLY get from a rewards program if I’m only going to diaper 2 kids?”

well. How many diapers will I REALLY buy?

My sister and I BOTH have looked at our piles of empty diaper boxes (that we often save to store baby’s clothes as they outgrow them), and lamented the fact that we wait so long to join the rewards program.

You can redeem the points you collect for gift cards, Melissa+Doug toys, or more diapers.

Whichever rewards you choose, you are basically getting free stuff in exchange for something you are buying ANYWAY. You could honestly turn buying diapers into shopping for free Christmas or Birthday presents for your kid.

I am insane to have not taken advantage of this much sooner.

Which is ridiculous because:

If you auto-ship your diapers (which you DO NEED and WILL USE) you can save 20%.

Plus, they show up at your door – no leaving the house.

Do you know how many times I have had to run to the store at 7 pm on a Saturday night because we were out of diapers?

Or how much money I could have saved if I had saved 20% of everything I’ve ever spent on diapers? ( Easily over 300$. And that’s just SO FAR. Which would have paid for the Prime membership 3 times over.)

You can sign up for a free 30 day trial of Amazon Prime here, and start saving on diapers (not to mention everything else you can auto-ship; think bum cream, nursing supplies, toilet paper etc.)

For the love of all things food, I wish I had done baby lead weaning with my first – in their first year.

We did this with my second, right from 6 months on, and she is a CHAMPION eater. I can sit her down in her high chair, put any food on her plate and leave her to it. Then I can eat.

With my first, I had that rampant anxiety, and while I can’t totally remember what I was afraid of, I do think it might have been choking.

Before his first birthday, I gave him fruit and vegetable purees and cereals. You know, old school baby food only.

My first is two and a half now and STILL won’t eat most things. Feeding him is a chore like nonother.

My sister and my cousin and I all sit around and whine about how our first children won’t eat, but following children, who were just ALLOWED TO EAT, will eat anything.

We all see this trend, and we all wish we had done baby led weaning in baby’s first year with every. single. kid.

Give them a snuggly thing to love

I just assumed all kids LOVE stuffies and will automatically gravitate to them and attach themselves to one or two.

Both my kids HAVE these sweet Jelly-Cat stuffies. They are the softest, cutest little things I’ve ever seen. (And they are exceptional quality. My sister’s kids DO love theirs very hard, and they hold up for years!)

But because we did not diligently bring the stuffies to bed and hand them to the babies over and over n their car seats, and impress on the babies that these are cuddly friends, neither kid has much use for stuffies. And that’s never been a real problem – until now.

We used pacifiers and slept WITH our kids, so they didn’t need a “comfort” outside of those two things (to go to sleep, or to calm down, or to cheer up etc).

And that was always fine… until now. Our oldest no longer uses a pacifier, and while I’d be happy to still lay with him to go to sleep, it’s distracting for him. When I’m there, he wants to chat. It’s hard to get him to lay still.

It would be SO EASY to just tuck him in with a stuffed thing and tell them to snuggle until they fall asleep, or to talk to each other for a few minutes. But he doesn’t have a stuffed friend – because we didn’t make sure he understood that a stuffed friend was a great thing as a baby, when they are easier to convince of new ideas.

My biggest regret about the first year with my first baby is that I couldn’t relax.

That first baby can really throw you for a loop!

Everything was stressful – feeding the baby (as I mentioned), bathing the baby, getting the baby to sleep, keeping the baby asleep, knowing who’s (always differing) advice to take. Building up a stupid pumped milk stash, including getting out of bed to pump – on nights I barely slept – only to throw the milk away two years later. (Because we didn’t NEED it.)

I wish I had just chilled the heck out. (I know I’ve said this before when I talked about how to enjoy the first week with a newborn, but it’s true way past the first week.)

This might mean different things for you than it does for me, but I specifically wish I had co-slept with my baby and forgone all the night time battles.  Our first-year memories include a LOT of nighttime battles. I wish I had read this book in my baby’s first year.

What are the important things to do in baby’s first year as far as you’re concerned? Anything I’m missing? 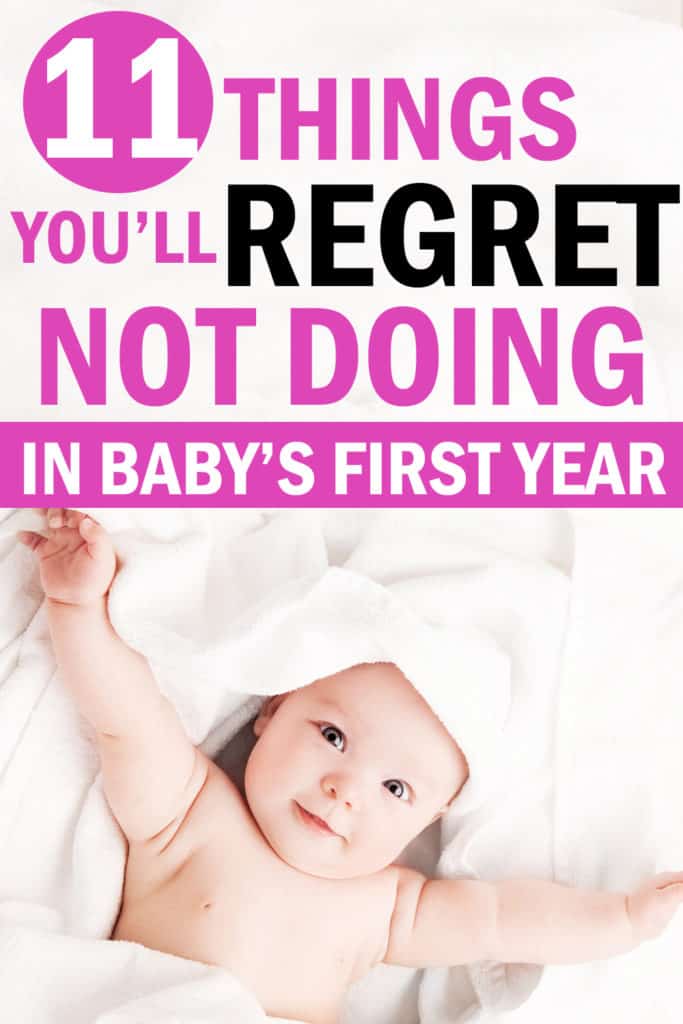 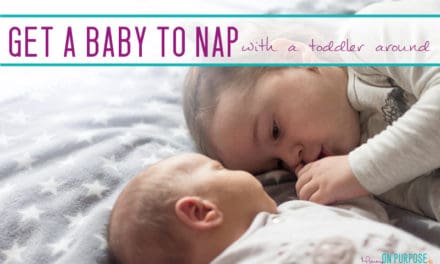 How to Make Naps Work With 2 Under 2 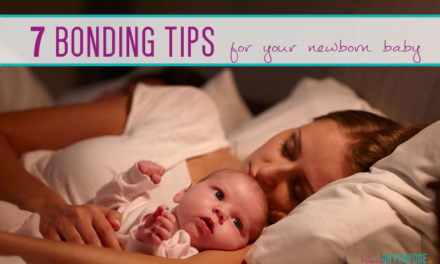 7 Tips for Bonding with your Newborn Baby 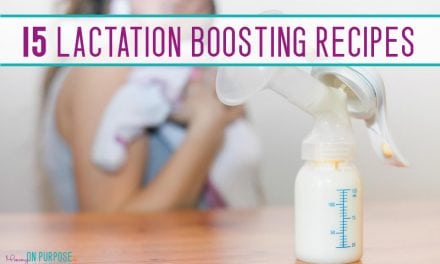 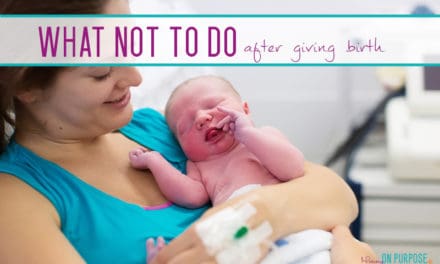 What NOT To Do After Giving Birth

Want to know how this blog makes money? Click here!

We are a participant in the Amazon Services LLC Associates Program, an affiliate advertising program designed to provide a means for us to earn fees by linking to Amazon.com and affiliated sites
862shares