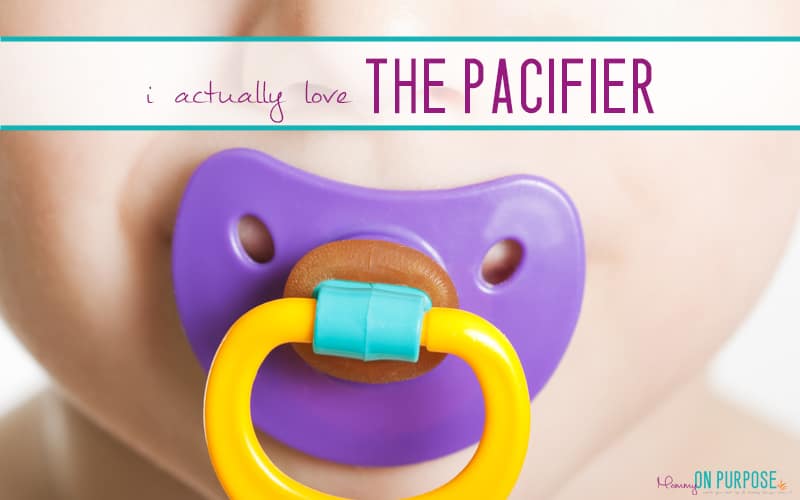 I think the biggest difference between the first kid and the second kid is the reduction in the sheer level of terror and stress that you feel about every. single. tiny. detail.

(Like, the idea that a pacifier is somehow ruining everything.)

Once you’ve lived through that first kid, and seen for yourself that all those massive worries usually amount to a whole pile of nothing bad at all, it’s easier to relax. One of the biggest pain points for us with our first was – of all things – the pacifier.

Whatever you want to call it – the soother, the binkie, the nuk, the dummy (we call it a dummy because some of the people in our marriage are British and I don’t get to choose ALL the words) – has been a topic of hot debate for a long time, and just one more thing to “worry” about when you become a mom.

I’m sure, if your children use a pacifier, that you’ve been told by some well-meaning friend or relative that

And I mean, there may very well be some truth at one point or another to some or all of those things.

But here’s another truth – you have to do what works for YOU, and this parenting thing is all about compromises.

And there are a lot of great PROS to using a pacifier – not just cons!

Perhaps in a perfect world, we wouldn’t need to have this conversation. But this world is far from perfect.

In my opinion, a pacifier is the best option for me and my baby

And, my opinion is the only one that really matters when it comes to me and MY baby.

How did I come to this conclusion after the first two years of freaking out about if I was making a terrible mistake by allowing it?

And how did I get past all the “terrible” things that were going to happen because of using a pacifier?

No one wants nipple confusion, for sure. And no one wants a low milk supply, either.

But you know ELSE no one wants?

To be sucked on 24/7 until your nipples are bleeding and you cry constantly because of the pain and the sheer exhaustion and the frustration.

Breastfeeding was HARD for me and my first. (And no, not because of the pacifier. It was hard because he had a tongue tie and while we requested that it be treated at the hospital, it was only clipped 25% of the way and we didn’t know that and so breastfeeding was affected.)

Without the pacifier to give me a little break here and there, we would have probably quit breastfeeding.

And milk supply? Well, I had a low milk supply too – but also likely because of the tongue tie and not the pacifier.  There are things you can do to increase your milk supply, and while avoiding the pacifier MIGHT be one of them, it’s definitely not the only one.

When you have to choose between a pacifier and your sanity, to me, the choice is an easy one.

The next thing I stressed about the most was baby sleep.

By giving my baby a pacifier – I knew was ruining his sleep!

He would NEVER BE A GOOD SLEEPER… and I’d be awake until he went to middle school, putting the pacifier back in his mouth.

But here’s the thing – my baby was a terrible sleeper ANYWAY.

With or without the pacifier! He was just bad at sleeping.

At least with the pacifier, we could actually GET him to go sleep now and then.

And remember, parenting is all about compromises. Choosing which ones you’re gonna make (and you are gonna make some, I promise).

Some babies are just bad sleepers, and need help to sleep. Almost ALL babies use a sleep association (or prop) of some kind.

For some babies, it’s nursing to sleep. (Which I think it a GREAT sleep prop!)

Even the most popular sleep training programs encourage you to give your child a sleep prop (they just want to it to be something that won’t ever involve you – like a stuffed thing, so that the baby can find it by themselves in the crib).

Basically the bottom line here is this:

Your baby WILL likely have a sleep prop, and despite the claims that a pacifier is a bad one, here’s how I find it stacks up against a stuffed thing as a prop (for example) –

I know kids who have been sleep-trained with stuffies, and yes, it’s amazing… but I have also watched their parents comb the fairgrounds for their beloved stuffy, or drive hours back in the opposite direction to retrieve it.

When my kid loses a pacifier, I just dig another out of my purse (or worst-case scenario, run out and buy a new one for 6$).

Also, when the pacifier gets a little worn and gross, I throw it out.

Not possible with stuffed friends. (Those, you often have to boil in an attempt to get the smell out.)

As for putting it back in their mouths all night long, that hasn’t been an issue for us because we co-sleep. (If you don’t co-sleep, I’d just use a wubanub pacifier at night, so baby can easily find it by themselves. Or sprinkle 10 dummys around in the bed. That would also work.)

Until I watched some pacifier free kids suck their fingers until well past their 3rd birthdays (or longer).

The thing is, babies and little people NEED a soothing mechanism.

Kids that don’t have pacifiers often suck their fingers, and that’s actually a harder habit to break in the long run – and does just as much (or more) damage to teeth and bite.

Pacifier once again seems preferable to me!

But almost anything can be a choking hazard.

We check our pacifiers regularly and change them out at signs of wear.

When my oldest started chewing on his, and damaging them, we switched to these harder silicone dummies.

At first, he didn’t like them, but we figured he would either wean from them then – or learn to use them.

He learned to use them.

And how hard is breaking the habit?

Honestly, this is up to you.

Just like with all things, the battle will only be as drawn out as you let it be.

If you are wishy-washy and give in every time they ask for it, it’ll take months.

We explained to him that dummies were only for night time now, and it took less than a week for the “problem” to be 100% forgotten.

He even got excited to help “tuck the dummy in for later” (throw it back onto the bed where it stayed).

We didn’t push nighttime weaning, and by the time he was 2 1/2 he gave it up at night naturally with no prompting.

If you want to use a pacifier – if your baby likes the pacifier – and it makes your life easier… just stop stressing about it.

With my second, we have another full-on lover of the pacifier, and this time it doesn’t stress me out AT ALL.

There ARE lots of things ruining your kid (lack of discipline, not enough parental investment, too much sugar, maybe even too much screen time…) but the pacifier isn’t one of them.

There are better things to worry about. 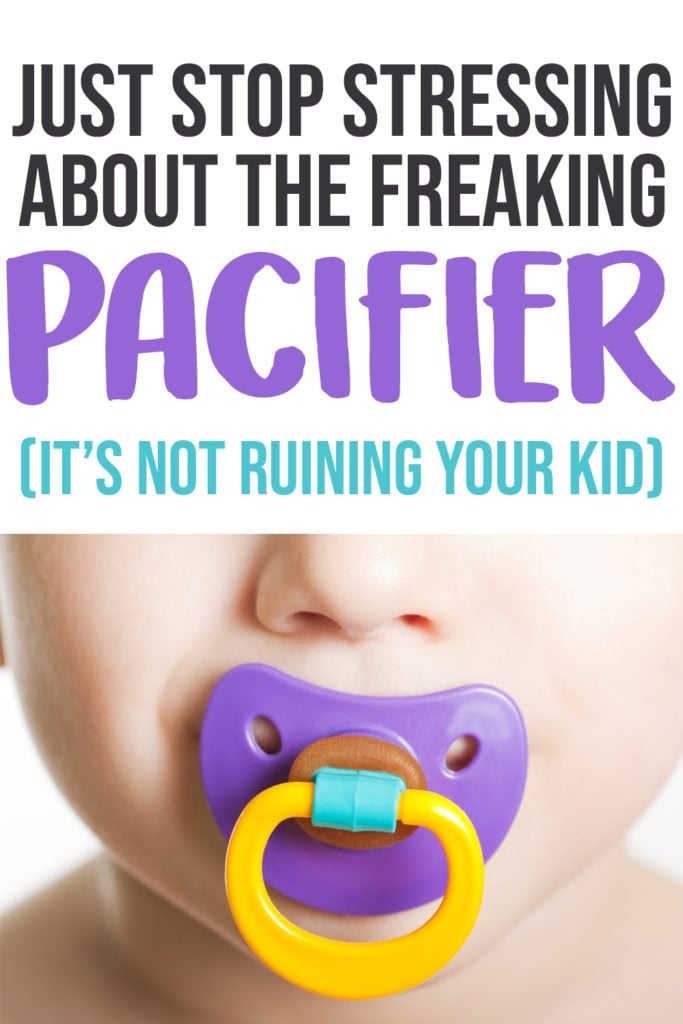 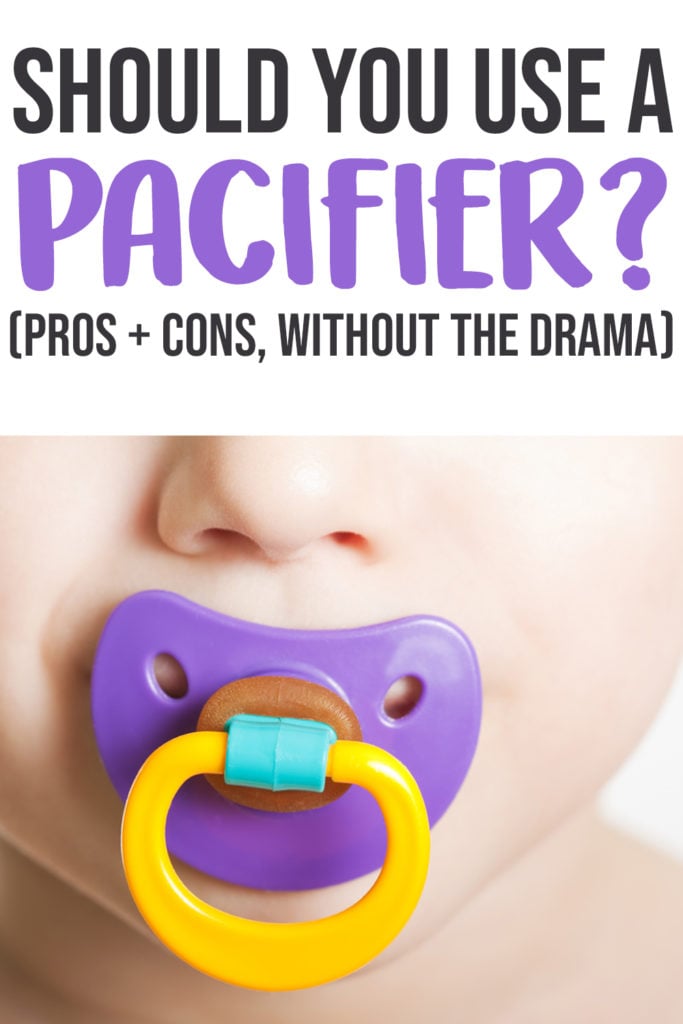 4 thoughts on “Stop Stressing About the Freaking Pacifier”

SUBSCRIBE AND I'LL SEND YOU MY PIN TEMPLATE STARTER KIT: 11 GORGEOUS PIN TEMPLATES, MY PERFECT PINS CHECKLIST, AND SOME OF MY BEST TIPS THAT YOU CAN IMPLEMENT FOR BETTER PINS IMMEDIATELY.
you can unsubscribe at any time
28 shares