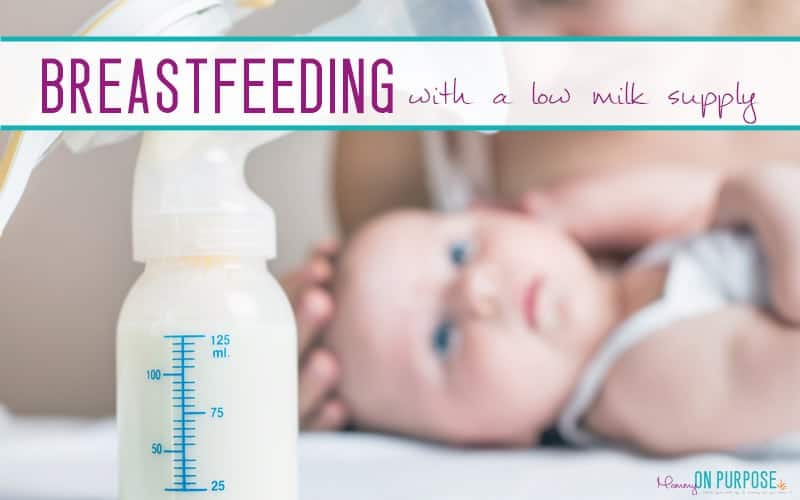 Do you have a low milk supply and wondering if you can breastfeed your baby? Yes, I believe you can!

Today I’m featuring a guest post by mother Jennifer Marx from JenniferMaker.com, who is sharing her secret to successfully breastfeeding your baby even with a low milk supply.

Breastfeeding With a Low Milk Supply

After years of infertility thanks to Polycystic Ovarian Syndrome, I gave birth to a beautiful, healthy baby boy.

I’d had YEARS to research and prepare for mommyhood, so I knew I wanted to breastfeed to give my child to give him the best possible start in life. In the hospital, the nurses taught Alexander and I how to breastfeed.

Alas, he was a pretty sleepy little guy and I wasn’t making much colostrum (pre-milk). Add to this the fact that my milk came in late on day 5, and Alexander had had enough of breastfeeding within a week. He’d cry, fuss, and shake his head when we tried to nurse. To say it was frustrating is an understatement. I shed many tears… and so did he. What if I did not produce enough colostrum (pre-milk)? Was my latch was still not quite right? I had many common problems encountered during breastfeeding. A lactation consultant came by to visit twice at my request. I learned that the latch was good. We decided to supplement with a bit of formula by syringe or cup, but not by bottle as that could lead to “nipple confusion.” So, I persisted.

I spent three days in the hospital post-delivery. When I got home, Alexander became quite fussy that evening and I spent a sleepless night trying to console him. The next morning I was at my wit’s end and worried something was wrong, so I went to see the pediatrician.

At my son’s first pediatrician visit, we received bad news. My son was continuing to lose weight. Most babies lose weight after birth, but then regain it within a week. My son dropped from 9lb. 4oz. at birth to 8 lb. 14 oz. upon discharge. The next day, he was down to 8 lb. 6 oz. Ack! Three days later he was down to 8 lb. even. You can imagine my concern.

Rather than alarming me, my pediatrician encouraged me to keep up with the breastfeeding and supplement him with just a bit more formula. He said that it’s not abnormal for a baby to lose up to 10 percent of their birth weight during the first week, although a weight loss of 5 to 7 percent is more common. Alexander was down about 13% of his birthweight. According to Newt (Newborn Weight Loss Tool), my son was quite a bit below the 95th percentile for weight loss. I wondered if I should give up. 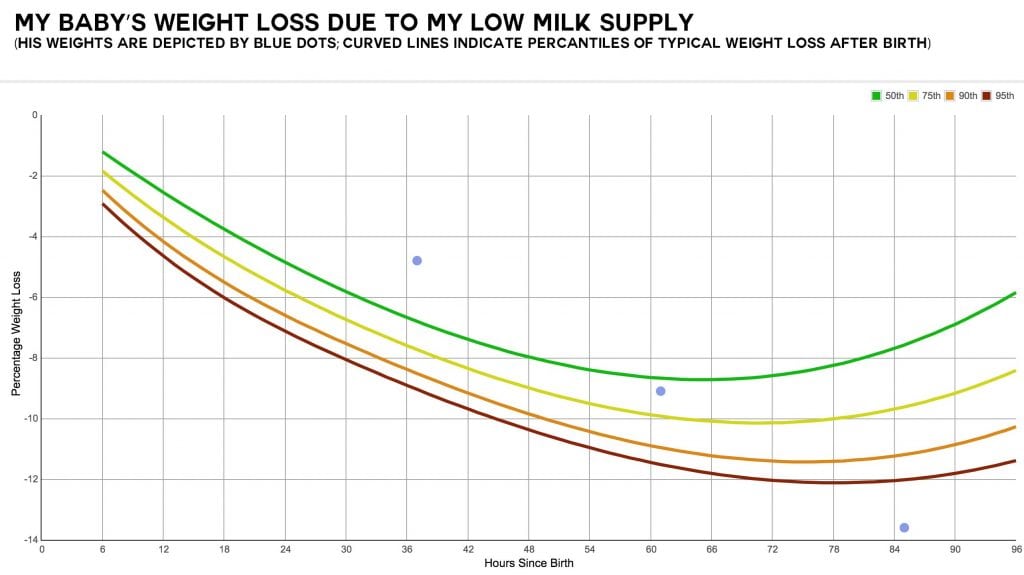 Formula to the Rescue

It was critical my son have the nutrition and fluids he needed, so I upped the amount of formula I fed him after each nursing session. But rather than give him a bottle, I fed him forumula by cup (a one-ounce plastic “dosage” cup) instead of bottle so as not to confuse him with differently-shaped nipples. Cup feeding a tiny baby is not an easy task, as the formula tends to dribble down his front and there’s a lot of spitting up and air-swallowing. I was sorely tempted to use a bottle, let me tell you! But I felt really committed to breastfeeding despite our problems. Breastfeeding offers too many advantages for me to give up on it easily. So, I persisted.

So I contacted a lactation consultant (a person who specializes in breastfeeding) . She gave me a few pointers and taught me a new nursing position, as my son’s ability to latch had become an issue by the lack of milk. She also had me begin using a supplemental nursing system (SNS), which delivers the supplemental formula via a tube while we nurse — this was supposed to encourage Alexander to nurse better. The SNS was hard to use, however, and caused a lot of frustration on my part. I came so close to just giving up so many times.

In desperation, I contacted yet another lactation consultant, who came to my house with a baby scale in tow. After a 45-minute nursing session, weighing Alexander both before and after, we discovered he’d gotten just 7/10ths of an ounce of breastmilk. At his size, he should be getting between 2-2.5 ounces of breastmilk during each session. No wonder he was losing weight! And I wondered again …  should I give up? Was it worth it to try breastfeeding with a low milk supply?

Instead of giving up my goal of breastfeeding, I began a long odyssey into increasing my milk supply. I unearthed just about every tip I could find, and tried so many of them. Here’s what I did:

I did it ALL. (Check out 10 Tips to Increase Your Milk Supply)

Did any of this work to increase my low milk supply? It seems so. Looking back at my logs (I’m tracked every feeding), I produced 2.7 ounces of breastmilk on September 1 (three weeks after his birth). The next day, I made 6 ounces. It was still far from being enough to sustain Alexander on breastmilk alone (he needed 20-25 ounces per day).

The good news is that he only needed to get 4 ounces of breastmilk a day to get the full benefit of its antibodies and immunities. So despite the frustration and tears, it was worth it and I knew I was doing the right thing for us.

And Alexander LOVED to nurse — he did it well and was very contented. Once I got into the rhythm of it and knew that I was providing him with enough breastmilk to get the valuable antibodies, I also enjoyed it. It was a very special relationship and it really helped me bond with him. But it took a level of determination and sheer stubbornness that I didn’t know I had to get this far.

Thanks to all our work with breastfeeding and supplemental formula, Alexander regained his birthweight and began to thrive again. At his next weigh-in, he was just about 10.5 pounds (almost 11 in his clothes). He was really doing wonderfully.

In the end, I managed to increase my low milk supply to 8-9 ounces per day. It was double what he needed for his daily immunity supply and it was enough that I could nurse him for 15-20 minutes about once a day without supplementing with formula.

But I did still supplement all the rest of the time. And I won’t sugarcoat it — it was tough. I had to clean and fill the supplement tubes and bags every day—that’s a huge task on top of everything else. I had to be organized and diligent for it to work. Spontaneity in nursing was not really an option, so I kept a mini fridge next to my bed, filled with bags of formula, for middle-of-the-night feedings.

For all the work, it did allow Alexander to get all his nourishment at the breast. He got 30-60 minutes of time with me at each nursing session—I don’t think he have gotten that much with just a bottle, which can be gulped down in a few minutes. Breastfeeding was really very rewarding and I’m so very happy I stuck with it when things got tough.

At one point in the midst of all this, I calculated that I’d nursed (and supplemented) Alexander something like 900 times since birth. That’s a staggering number, but it was also something I felt very happy about and proud of. I may not have made a full supply of milk, but darn it, I breastfed my baby and we both benefitted from it! Through nursing, I discovered what large surges of oxytocin (the “bonding hormone”) feels like, for which I am very grateful.

My son is now 12, almost 13, and he’s a super healthy kid. He rarely gets sick, he’s creative, he’s resilient — and he’s been like that throughout his childhood. I credit much of this to our willingness to stick with breastfeeding so he got my colostrum in those very early months and the fact that we were able to bond with one another so well throughout the long nursing sessions.

The Real Secret to Success

By now you’ve probably already guessed my real secret to successful breastfeeding with low milk supply. It was plain ol’ persistence. I kept trying, despite the setbacks and frustrations. Technically, I was giving my son more formula than breast milk, but I was still feeding at the breast. One could do this even with zero breastmilk and still reap the benefits of bonding time and hormone production.

Allow me to recap the the things I did that I felt made a real difference both in increasing what milk I had and helping my baby thrive:

In short, H.O.P.E.S. And it is my hope that you will find success at breastfeeding, even if you have a low milk supply. Stay strong and persevere, mom! 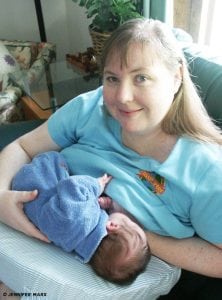 Jennifer is an award-winning, bestselling author of the PassPorter travel guidebook series as well as a craft & DIY blogger at JenniferMaker.com. She lives in beautiful Ann Arbor, Michigan with her son Alex, partner Greg, and dog Hunter.

6 thoughts on “Breastfeeding With a Low Milk Supply”

SUBSCRIBE AND I'LL SEND YOU MY PIN TEMPLATE STARTER KIT: 11 GORGEOUS PIN TEMPLATES, MY PERFECT PINS CHECKLIST, AND SOME OF MY BEST TIPS THAT YOU CAN IMPLEMENT FOR BETTER PINS IMMEDIATELY.
you can unsubscribe at any time
688shares