After a solid 9 months of doing without sushi, soft cheeses and wine, you might be SUPER excited to bring baby home and START EATING!

You might be excited to hear that – for the most part – FOOD is generally not one of the major restrictions after giving birth!

When you’re pregnant, they’ve got solid data-backed reasons for telling moms to give up alcohol or foods that pose higher risks.

When we question what not to eat after giving birth, it’s more from the perspective of if it’s a healthy thing for your body right now, and – if you are breastfeeding – is there a chance the food will be hard on the baby’s stomach.

Because of this, you may choose to avoid some foods after you have a baby because you find they disturb baby’s sleep or cause baby to get gassy, and it will make your life FAR easier to avoid them.

As usual, consult with you doctor about any questions you have regarding your (and your baby’s) postpartum health!

Foods to Avoid after Giving Birth (for baby’s safety)

As I said before FOOD is not generally as dangerous to your baby AFTER he is born than it can before he is born.

While pathogens like listeria, toxoplasmosis and salmonella can still definitely make you sick, they can’t make it into your breast milk and harm your baby (whereas during pregnancy they can pass through the placenta and potentially harm your unborn baby) (source).

There are, however,  a couple of things that are questionable, but these things would only be a problem if you consume a lot of them.

The few things we should be very careful about consuming after giving birth are:

Honestly, I’m in the “it’s perfectly fine to have a drink (or two) and breastfeed” camp. The amount of alcohol that passes through your breastmilk into your baby is minute.

HOWEVER, over-drinking – especially after a solid 9 month hiatus – poses other (scary) dangers…

If you drink too much and aren’t able to properly care for your baby, that’s a problem.

If you drink too much and fall asleep with the baby, that’s a HUGE problem. (It takes co-sleeping from a pretty safe thing to a wildly dangerous thing.)

Remember, if you’re taking any medications postpartum (even pain killers) alcohol could interact with those – and THAT can be dangerous.

Excessive alcohol will also slow the healing process, dehydrate you (super bad when you’re making milk!) and interrupt the (likely limited) sleep you’re getting, so it’s a good idea to avoid excessive drinking after giving birth.

When you’re pregnant, you’re avoiding sushi (for example) because there’s a high risk of getting sick from bacteria or parasites that could be present in raw or improperly handled fish.

When your baby is OUT of your body, the risks from eating fish are not the same.

It’s widely accepted that nursing women (and you know, humans in general) shouldn’t allow their mercury levels to get to high, so do be careful about eating these fish.

If you love fish and avoiding it would be hard for you, choose low-mercury fish, such as salmon, pollock, catfish, shrimp and canned light tuna. These are safer for nursing moms (source).

Foods to avoid after giving birth (for mom’s sake)

Beyond the “danger” foods – alcohol and high mercury fish – there is truly nothing that’s TOTALLY OFF LIMITS for all postpartum moms after baby is born, food-wise.

HOWEVER, considering your current “situation” (all the postpartum glory), I personally would consider limiting:

Just for a few days to a few weeks – until everything “downstairs” is feeling better. (If you’re feeling especially sore and haven’t considered it, try a postpartum sitz bath to relieve discomfort!)

We don’t want to be straining to poop. We’ve done enough straining.

You’ll likely know which foods are problematic for you personally when it comes to constipation.

Again, until your healed up, I wouldn’t want to go adding any further mess to your below the belt situation!

I personally can not tolerate coconut water.

It runs right through me, regardless of how long it’s been since I had a baby.

While not straining is a good idea, and a stool softener is ALSO a good idea, a full on rush for the toilet is also not something I want to do after giving birth.

I want to be able to slowly and carefully make my way to the toilet.

Related: How to Pee Postpartum (Without Crying)

If you are breastfeeding, the food you eat will pass through your milk into your baby. This will make some foods a good idea… and some foods a bad idea. Coffee, for example, may disturb your baby’s seep.

Not all babies react to all foods their moms eat.

Some babies don’t seem to react to ANY foods their moms eat!

There are some foods that seem to be common culprits of baby sleep problems, or diaper rash, or gassy tummies, however.

You will want to introduce these foods SLOWLY after giving birth, to SEE how the affect your baby.

If you drink coffee, eat chocolate, garlic, tomatoes and spicy foods all in the same day, you won’t have a CLUE where to start with cutting back on what might be bothering your babe.

Coffee, tea, soda, and chocolate are all common sources of caffeine in our diets.

If there’s one thing you don’t want to mess with after giving birth, it’s your chance to SLEEP.

It’s hard to hear “no coffee” as a new (exhausted) mom, but give it a few days… see how your baby sleeps (or doesn’t!) and THEN have a cup of coffee.

If it does, you might want to avoid caffeine all together.

The tastes from strong spices + garlic may make your milk taste “bad” to your baby.

Spices and garlic pose no health risks to baby through breastmilk, however, and some experts even disagree that they often upset baby’s tummy.

Introduce garlic and spices into your diet and see if you feel like they bug your baby – momma knows best!

This is definitely one of those things that seems to vary by baby, but some seem babies get diaper rash when exposed to lots of fruit with high vitamin c content.

If you find you eat pineapple or mango or limes (or anything else) and your baby gets a sudden and very unexpected rash, try cutting back on high vit. c foods.

My babies never seemed to be bothered by the food I ate.

Should you avoid “gassy” foods after giving birth?

There’s very mixed information as to if you should avoid foods that make baby “gassy”.

Experts actually often agree that most gas in babies is just due to immature digestive systems, and that some babies are gassy little things.

So go ahead and eat those gassy foods!

However, your the mom, and mom knows best – so if you think that something you’re eating is bothering your baby, do bring it up with your doctor… baby COULD have a legitimate food allergy, and then you would need to avoid whatever food is troubling him!

Can you eat peanuts (or other common allergy foods) after giving birth?

If severe allergies run in your family, you must speak with your doctor to determine if it’s safe to eat peanuts (or strawberries or shellfish etc) after giving birth.

In GENERAL it is safe to eat common allergen foods, but peanut  / food allergy through breastmilk IS possible, so if someone in your immediate family, such as your other children, has a peanut allergy, it is safest to avoid them altogether, as there is a possibility your baby might be allergic.

Instead of worrying about what to avoid, focus instead on what you SHOULD eat after giving birth

Because the list of foods to avoid after giving birth is actually quite short, and because after 9 months you’re probably tired of restrictions, instead of focusing on what you shouldn’t eat…

Focus on what you SHOULD eat!

Your body is healing and (likely) producing breast milk… give your body plenty of fresh, whole foods.

There’s nothing inherently wrong with enjoying a burger, so go ahead and do that – just make sure you eat your veggies and drink plenty of water too!

You may also want to read:

It’s natural to find yourself asking “what food should I avoid after delivery”, but you don’t have to stress about food too much anymore! Talk to your doctor, and eat! 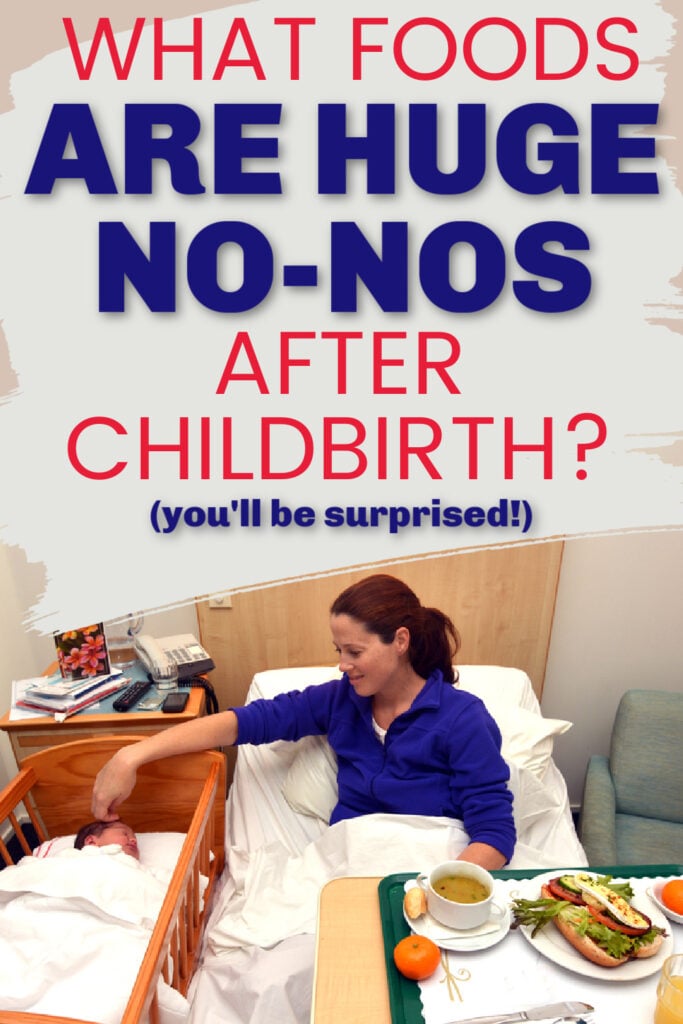 SUBSCRIBE AND I'LL SEND YOU MY PIN TEMPLATE STARTER KIT: 11 GORGEOUS PIN TEMPLATES, MY PERFECT PINS CHECKLIST, AND SOME OF MY BEST TIPS THAT YOU CAN IMPLEMENT FOR BETTER PINS IMMEDIATELY.
you can unsubscribe at any time
37 shares