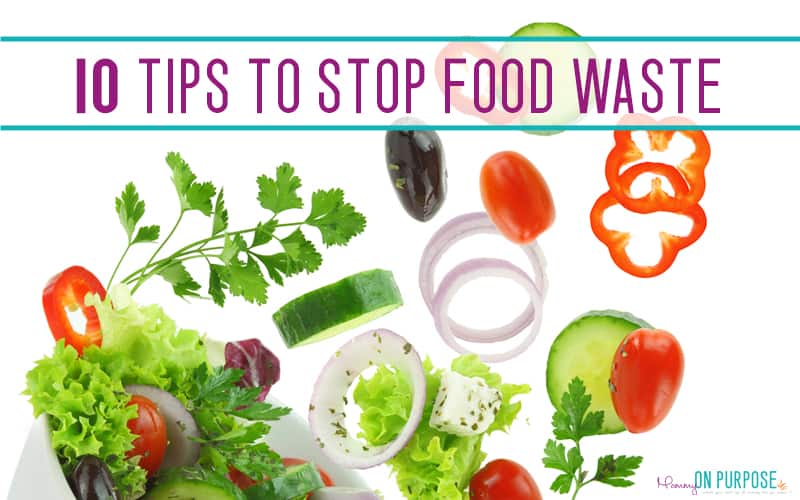 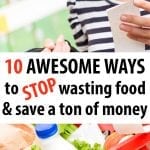 Before we can have an honest conversation about how to stop wasting food, we need to look at some statistics. Did you know that just one quarter of all wasted food could feed the 795 million undernourished people around the world who suffer from hunger (source)?? What about the fact that In the USA, 30-40% of the food supply is wasted(source)?

More personally, the average American throws away between $28-$433 in the form of about 20 pounds of food each month (source). That is an INCREDIBLE amount of money throughout the year! If we use the smaller numbers, 28×12= $336.00 per YEAR that’s money we are just throwing away.

I have been (past tense) one of the worst food-wasting offenders. Week after week I’d end up throwing out an avocado, a pepper, half a package of bacon, a Tupperware or two of questionable leftovers. I never thought of it as acceptable, but I seemed to be totally unable to control the waste. It was like it was just… happening.

(Um, yes, because I was letting it happen.)

Since wasting was happening so often at my house, it follows that if I wanted to stop wasting, I needed to ditch my bad habits and grow new habits. I started by identifying what I was doing wrong. It wasn’t that hard.

Related: Ten things I quit buying to save money

Yikes. Those were the things I WAS doing. Here’s what I do now to avoid waste.

I no longer buy yogurt or melons.

♥ Buy what you know you can use. This (usually) means – for me – no more fresh produce from Costco. Saving a couple of bucks isn’t really saving if you’re throwing half of what you buy away. Big giant bags of salad aren’t allowed into my house. We can’t eat a giant bag of salad before it dies. Big tubs of mushrooms on the other hand? No problem. (I put mushrooms in everything.) Two pack of giant roasts? Yes please, one to cook and one to freeze.

♥ Meal plan – very loosely even. If you wanna plan every meal, that’s awesome! I only do supper, and I don’t stick to the meal plan religiously (here’s a great way to start meal planning!) But before I go shopping, I always scribble out a list of the meals we’ll be having in the upcoming weeks. I don’t assign a date to them, just ingredients. That way I can make sure I’m using up what’s in the fridge and also that I’m buying stuff I know I’ll use. I reference the list a few times per week after that, just to make sure I’m staying on track and there isn’t a salmon going to waste somewhere.

♥ Follow good sense anti-spoilage rules: don’t contaminate dairy/meat/bread, wash your produce with vinegar, store potatoes and onions in the dark. Ever notice that where you touch a block of cheese that’s the first place that it gets moldy? Bacteria on your fingers can cause spoilage… Same goes for meats and breads. Don’t drink out of the milk jug. Besides being icky, that will absolutely cause it to go bad faster. Bacteria also ruins produce! Berries especially tend to last SO much longer if they get a vinegar bath. Fill a (clean) sink with room temperature water and a 1/2 cup of white vinegar and soak all your produce as soon as you get home from the store. Stuff that comes in those little plastic tubs with all the holes? Don’t even unpackage it, just submerge the whole thing! By eliminating the bacteria you’re giving them a longer lease on life. Let everything drip dry on a tea towel before you put it in the fridge. Potatoes and onions are weird little hermits, and they like the dark. Just give them what they want.

♥ Write dates on jars and bottles as soon as you open them. So straightforward. I write the date I opened something on the lid, and we use it before it gets to be 2 years old and we’ve forgotten when we bought it.

♥ Freeze it right away.  If it’s something like pasta sauce, I know I won’t use the rest of the jar in the next week, I write “frozen when opened” on it and throw it in the freezer. (This is to differentiate from all the questionable ones I’ve frozen previously that I stumble upon now and then, the ones that I froze when I discovered them in the fridge and had no idea how old they were but felt guilty throwing them out.)

♥ Actively decide, when cooking, if there will be leftovers or not. No more just cooking and then finding out how much you’ve made. This takes a little practice, but eventually you’ll know exactly what your family will eat, and you can cook to either have leftovers or to not have leftovers. I plan at least two nights of leftovers per week.

♥ Don’t store things in containers you can’t see into. As much as I love my brightly colored Tupperware, they just aren’t conducive to being less wasteful. (Plus it may be healthier to store your food in glass!) I find that if I can’t see the leftovers, it’s like they don’t exist. And they DEFINITELY don’t exist to anyone else in the house. See through containers at the front of the fridge. Makes all the difference. (I have a set like this, and I LOVE them because I can cook in them too. Multi-purpose is my favorite!)

♥ Use your good judgement, not your sell by date. If you have absolutely no good judgment, fine. But realize that your milk, cheese, dressings, and even processed meats don’t KNOW that they are a day (or five) past expiry. If it smells terrible or if your stuff is growing new stuff, don’t eat it. But don’t throw it away just ‘cus some company that doesn’t want to be sued stamped a date on the package. There is currently a chicken in my fridge that was 30% off in the supermarket because today was it’s best before date… it’s totally going in the crockpot in the morning. (With raw poultry, seafood and pork be a little more careful. Always cook these things to well done.)

♥ Give food away. On the off chance I’ve bought too much or discovered we don’t like a new product, I would so rather see someone else eat it than store it for a week or a year and then chuck it.

♥ The thing that has made the biggest difference is that I made a decision to stop wasting food, and I remind myself of that often. (Can I count this but call it a half a tip, since it’s sort of more theoretical than practical?)

If I forget a pepper in the fridge and it gets a bad spot, I chop up the good part and put it in the freezer for chili. If I open a package of bacon I cook the whole thing, regardless of if we are gonna eat it all right away. Cooked bacon can be used so much more easily than raw bacon so it’s 10 times more likely to get used up!

Our bank account is much healthier and my conscious is so much clearer now that I’ve been able to stop wasting food. What tips do you have to cut down on food waste? 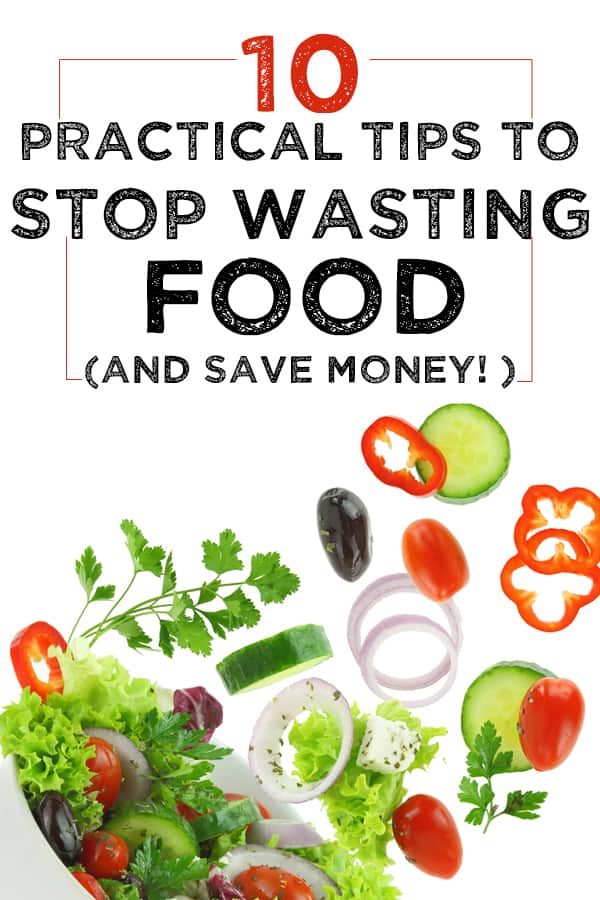 24 thoughts on “Stop Wasting Food – and SAVE MONEY!”

SUBSCRIBE AND I'LL SEND YOU MY PIN TEMPLATE STARTER KIT: 11 GORGEOUS PIN TEMPLATES, MY PERFECT PINS CHECKLIST, AND SOME OF MY BEST TIPS THAT YOU CAN IMPLEMENT FOR BETTER PINS IMMEDIATELY.
you can unsubscribe at any time
532shares