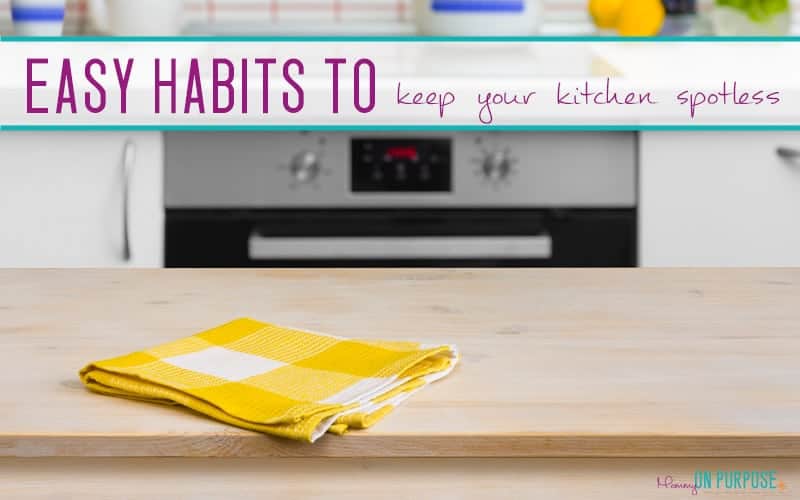 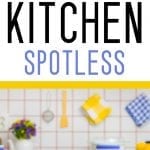 When my kitchen is a mess, my whole life feels messy.

Maybe you’ve always known how to keep the kitchen clean, in which case you might not totally relate to what I’m about to say here. But when my kitchen is a mess, I feel like everything in my whole house is behind, or confused.

A messy kitchen it so irritating and overwhelming to me, that getting it clean feels a little bit like when painkillers start to kick in. You know, if you’ve had a brutal headache or backache. And you take a Tylenol and 20 minutes later you can feel the relief and life is just better. (I’m not crazy, this is a real thing!)

I used to be messy. I HATED it. It was like the mess was causing me physical pain. Even though it’s been awhile now since I quit being messy, I can still feel the relief that not living in a mess brings. I can still appreciate that not messy is just SO much better than messy. It. Is. Awesome.

When I decided I wouldn’t live messy anymore, the kitchen was one of the places where I knew I had to change a few habits if I wanted this not-messy thing I was doing to last. It was also one of the hardest areas in my home for me to tackle. (If you’re ready to stop living in a mess but don’t know how, here’s my best advice for where to start cleaning a messy house.)

(Ok, who am I kidding? It was all hard. But the kitchen is the first place I come into when I get home, and I drop everything I’m holding there, so it did seem to take a lot of the brunt of my messy-ness.)

Why was my kitchen always so messy before anyway? Cus I was making it messy.

Once I could see what my bad kitchen habits were, it wasn’t nearly as hard as I thought it would be to figure out how to beat those bad habits.

To deal with kitchen mess I began:

♥ Putting everything away as soon as I walk in the door. Not that hard to begin with (just do it).

Even easier if you develop a system for the things that are regularly ending up on your counter top. I still come in and set everything down.

But then I immediately pick one thing up again and it put it away. And then another thing.

Mail gets opened and sorted (directly into recycling or onto the desk in the office). Coats get hung up. I bought an adorable little colander that sits on my window sill (just like the baby one in this set) and keys go in there. (Bonus – I can always find my keys now!) My purse goes to it’s place by the microwave. Random things that come into the house are taken out of the kitchen and put wherever they belong.

This wouldn’t be possible without:

♥ Having a home for everything. This one took some thinking. And some getting rid of stuff I don’t use, to make room for stuff I DO use.

The keys live in the colander. G also got a “key home”; he has a basket on the DVD shelf (sounds random but it’s right at the end of the hallway), where he empties his pockets in the evening. His keys, chapstick, screws and weird connector things (and all manner of other stuff that he used to abandon on the counter over night) go there now.

Things that used to just hang around in the kitchen, like the salt and pepper, my cute ladybug timer, and my giant pot of coconut oil all have permanent homes by the oven.

Everything goes back to it’s home as soon as I’m done with it.

♥ Dealing with dishes ASAP and ditching dishwasher guilt. All my new clean kitchen habits are relevant, but I think this is the single most important one.

I know that running my dishwasher isn’t free, but I actually can afford it and sometimes it’s ok to make choices that make your life easier (as long as these choices are properly weighed out, and you recognize that you could save money by giving it up if necessary). Dishwasher soap is one of those things I buy in bulk and my dishwasher doesn’t use that much water.

I HATE doing dishes. But I’m committed to having a clean house, so this is my way of getting there.

♥ Washing the countertops every day. This might sound like a no brainer, but if my kitchen counters didn’t seem dirty before, I didn’t see a need to wash them.

I think the reason this is so big isn’t because the counters were dirty and needed washing (it wasn’t like I was leaving sauce all over them…) but it’s because to properly wash counters, they must be cleared off.

And it just feels good, to have clean counters.

It’s starting to feel so natural, these clean kitchen habits, that I sometimes wonder why I didn’t do them before.

Particularly when I think about how much stress my messy kitchen caused me. Keeping the kitchen clean also helps me to keep the rest of the house clean (since we have an open plan home, with the kitchen, dining room and living room sort of existing together). When one part of the space is a mess I tend to let the rest of it fall apart too. (And I can’t be the only one who does that!)

One reader recently commented (on my post about how I quit being messy) that if she spent all her time “cleaning” she wouldn’t have time for anything else. I totally get that, because I used to have to spend hours “cleaning” (really, tidying) before I could even START cleaning… because the mess was in the way.

What I have found, though, is if you develop these clean kitchen habits (that literally only take a few minutes each) then you don’t HAVE to spend time “cleaning”.

The best examples that come to mind are the sink and the garbage. When I let gross dishes pile up in my sink for three days, the sink actually needs scrubbing. It gets gunky. When there are no dishes allowed in the sink, all it needs is a quick rinse and wipe.

When the garbage is full and I keep adding to it and smushing it down, the whole garbage can gets gross and it needs scrubbing too. If I just take the time to take the garbage out, the bin stays clean.

Just something to consider, if what I’m suggesting sounds like work to you. (It sounded like work to me before I tried it too!)

If you don’t believe these simple clean kitchen habits can make a big difference in your messy kitchen – just try it for two weeks. And let me know how it goes!

Related: Organizing the Bathroom Cupboard: Facing the Truth Under the Sink

36 thoughts on “Habits to Keep Your Kitchen Spotless”

SUBSCRIBE AND I'LL SEND YOU MY PIN TEMPLATE STARTER KIT: 11 GORGEOUS PIN TEMPLATES, MY PERFECT PINS CHECKLIST, AND SOME OF MY BEST TIPS THAT YOU CAN IMPLEMENT FOR BETTER PINS IMMEDIATELY.
you can unsubscribe at any time
2018 shares