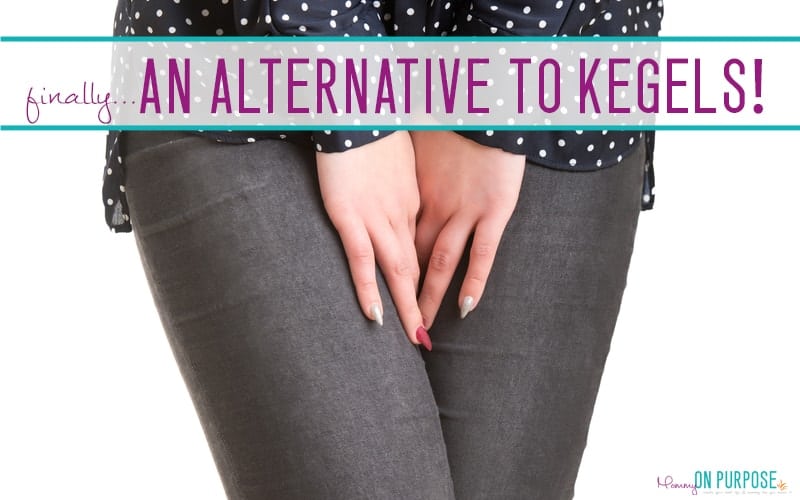 This is a guest post from Dr. Orlena Kerek, from snottynoses.com. She is sharing something super exciting – an ALTERNATIVE to kegels – read on to lean about Hypopressive Pelvic Floor Exercises.

I don’t know about you but my pelvic floor has never really returned to its pre pregnancy condition.

(At least, not before I learned about Hypopressive Pelvic Floor Exercises! But I’m getting ahead of myself.)

So my pelvic floor wasn’t in great shape postpartum –

Which is hardly surprising if you think about it.

Imaging having to carry around a watermelon or two for a week and I think your arms would be pretty sore.

That’s pretty much what it’s like for your pelvic floor muscles.

Except it was a bit longer than a week and we haven’t even mentioned the squeezing it out bit (or indeed all those hormones rushing around making everything even stretchier than it was before).

Our pelvic floors are useful for lots of things. They help us enjoy sexual relationships and keep in things that we do on the toilet (yep, wees and poos!)

It’s embarrassing to admit, but after having 4 kids, my bladder control never really went back to normal.

When I needed to sneeze, I’d do this awkward “cross my legs” thing. Not very elegant and a bit obvious if you have to stop halfway down the street to sneeze. Same with coughing and laughing.

Who wants to avoid laughing?

It wasn’t until my mum borrowed a huge trampoline that I realised I had to do something about my pelvic floor and tackle the unmentionable “stress incontinence” once and for all.

I trotted off to see my midwife, who examined me and told me I had a whopping 0/5 pelvic floor strength.

I guess things can only get better!

Lots of women suffer from pelvic floor weakness, especially after childbirth. (Overweight people often also have problems with their pelvic floor due to the pressure of the weight pressing down on the pelvic floor muscles.)

The silly thing about us women is that we don’t like to talk about things like pelvic floors and stress incontinence.

Which is foolish, as chances are our friends are in the same boat.

Even more sad is that we also don’t like to talk to health professionals who can help us.

I know this from personal experience. I had every opportunity to talk to my midwife straight after my twins were born. In fact, I remember them asking me about incontinence but I just said “no problem” there and brushed over it, hoping it would get better by itself!

As predicted, he (yep! I have about the only male midwife in Spain)…He told me to do some “kegels”. (You know those squeezy things where you have to pretend to hold in a fart, or “botty pop” if you’re in polite company.)

In theory you should do at least 3 squeezes around 5 times a day.

Luckily no one can see you doing them. You can do them pretty much anywhere. I try to squeeze them in when I’m driving. Pardon the pun!

Except that I’ve done heaps of kegels and still seem to have pelvic floor strengthen of a massive 0/5.

I’ve also tried pelvic balls or cones. It’s a little weighted ball or cone that you put up (as if you were inserting a tampon.)

The idea is that you leave it in and your pelvic muscles are working to keep it in place. Perhaps my pelvic floor was too weak because I didn’t really enjoy it and on the day that it fell out (luckily I was home alone) I gave up on pelvic balls!

Surprisingly, the midwife also told me to book myself into a course of “hypopressive exercises”.

What on earth are hypopressive exercises? I had never heard of them before.

They are a relatively new form of exercise that is used for stress incontinence (as well as pelvic floor prolapse.) The theory is that you reduce the pressure in your abdomen allowing your pelvic floor muscles a bit of R and R. (If you have a prolapsed uterus, it could temporarily reverse the prolapse.)

Luckily they’re super easy to do. You just do this “breathing in” thing, then “breathing out” thing. Then you hold your nose and pretend to breath in, except all you do is inflate your lungs (and don’t actually breath in.)

But the best part?

When I went back to the midwife, my pelvic floor strength had improved from 0 to 2 out of 5!

What Do the Experts Say About Hypopressive Pelvic Floor Exercises?

From a research point of view, the medical world is still undecided if they’re as good as kegels which have a good body of research saying they work well. (Except not so well for me.)

Personally I love them. Not just because I can now walk down the street and SNEEZE without fear but I can also do them in little bits (like when I’m waiting at a traffic jam, or waiting for my kids to read them bedtime stories.)

(They aren’t entirely invisible like kegels but they aren’t totally obvious and as you’re just “breathing” rather than actively moving your pelvic muscles, it’s not embarrassing.)

I’ve even taken to doing a few minutes on the beach every day!

I’ve put together a FREE 5 Day Challenge to show you how to do them. I’ve also put together a longer 30 Day Pelvic Floor Program to talk you through a short class every day (5 days out of 7).

Most stress incontinence after childbirth doesn’t get better by itself but it’s easily treatable with pelvic floor exercises. So come and join the 5 day challenge now and learn to sneeze without fear.

SUBSCRIBE AND I'LL SEND YOU MY PIN TEMPLATE STARTER KIT: 11 GORGEOUS PIN TEMPLATES, MY PERFECT PINS CHECKLIST, AND SOME OF MY BEST TIPS THAT YOU CAN IMPLEMENT FOR BETTER PINS IMMEDIATELY.
you can unsubscribe at any time
108 shares