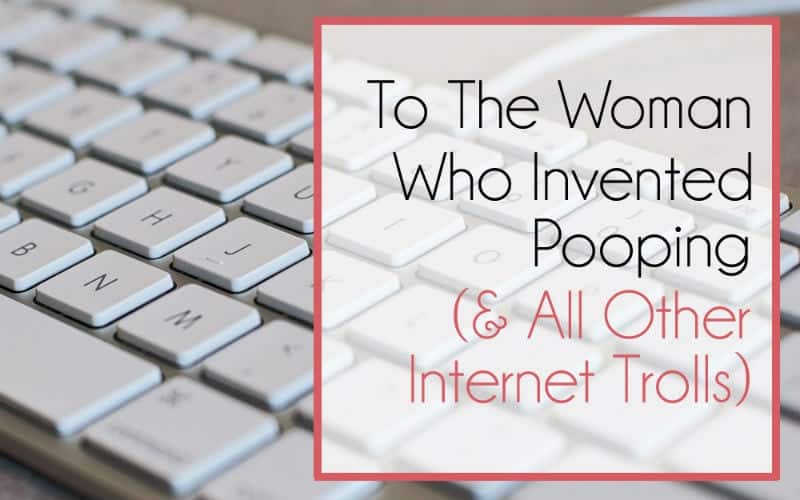 I don’t know how I feel about blogging today.

I know I want to do it, I know I want to be successful at it. But I don’t know if I’m really cut out for it. There’s this aspect of putting yourself out there to be judged by every human in the world who has a pulse (and an internet connection) that is absolutely, completely and utterly, terrifying.

I have a freaking awesome group of bloggy friends, and last night our discussion revolved mostly around a comment left on one of Jamie’s (from Simple Living Mommy) posts. A BULLET JOURNAL POST. I just can’t quite get over it.

Blogging sometimes makes me do things I thought I would never do. I have always thought of “open letters” as sort of lame…

But this woman, who claims to have invented pooping, has made me feel a little soap-boxy.

If what you feel really deeply about is bullet journals, maybe there is also a time to re-asses your priorities.

To the woman who invented pooping (& to all the other internet trolls out there):

A couple days ago, you left a comment on a blog post you read. (Here’s a screenshot of it, to jog your memory). It probably took you all of 15 seconds (or less, considering how well thought out it was) and it probably didn’t cross your mind again. 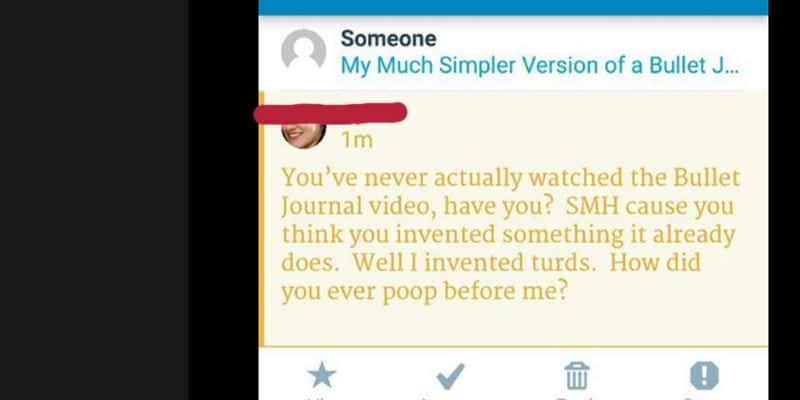 It might surprise you that your comment is generating this sort of response. (Well, maybe it won’t – you’re obviously very important.)

I do realize the comment is pretty benign. But consider it “the straw that broke the camel’s back”… (I’ll admit that this was a weak camel, I have been VERY blessed, and not too horribly attacked online. But I live in constant fear of you, the internet troll, and it irks me to no end that you took the time write this. To a woman who doesn’t deserve it, about a bullet journal post.)

First of all, I’d like to tell you that this isn’t the letter I originally wrote. The first letter was exactly what I was thinking. It was nasty, it was funny (- I mean comm’on, I had the chance to use the expression “queen of sh!t”). But I couldn’t click publish on the first letter…Because it’s not who I am and not what I stand for.

Even though I have those nasty thoughts, I have the ability to recognize that they are nasty, and to not share them. It’s a choice I can make, because I don’t want that impression of me online (or anywhere) for the world to see. Plus I believe it’s actually wrong for me to say some of the things I’m thinking about you. But I will say this: even though I am choosing not to be nasty, I can still be honest.

So Turd Lady, lemme level with you.

Do you not know that you’re mean?

It’s a post on BULLET JOURNALING. (I know, I keep saying it, but I can hardly believe it.) How can you make a bullet journal into a controversial or negative thing? How?

Maybe it’s a joke? You found the most innocent, unoffensive post ever written and you just wanted to get it out there that we owe you the credit for turds?

You’re a weird lady. SMH cause you actually took the time to write this. (Totally had to ask what SMH meant. For anyone else who doesn’t know – it’s “shaking my head”.) Yes, Turd Lady, you were shaking your head. About the bullet journal post.

All sarcasm aside, what’s wrong with you? And what’s wrong all the other people who troll the internet, writing nasty little notes to people who are just a) trying to make a living, b) enriching other people’s lives by sharing theirs, c) not hurting anyone at all with their writing?

If you don’t like the post that’s fine… you’re totally entitled to hate the idea. Maybe you even close the browser. But what’d the author of this post ever do to you, that you felt the need to cut her down? Over something SO simple?

You’re a mean girl, and that was a small, sad, thing to do. So please, go away. And take your turds with you.

To all the other internet trolls out there, why are YOU like that? Are you so jaded that you don’t believe the world could actually be a nicer place if you were… nicer? Or  do you genuinely not believe that you are part of the problem?

I’m not talking about rainbows and sparkles and fake compliments. Go ahead and take a stand when it’s something that matters. Goodness knows, my personal Facebook page isn’t always the most popular place.

But when it’s something that really doesn’t matter? If you just sit down and shut up, the world will be a nicer place.

Why don’t you want that?

(And to anyone out there thinking about blogging, (or already blogging and having to press delete on comments like this from crummy people all over the world), don’t let these people get you down. Just be warned that they are out there, and be ready to ignore them.)

That’s about it Turd Lady, and thanks for listening. 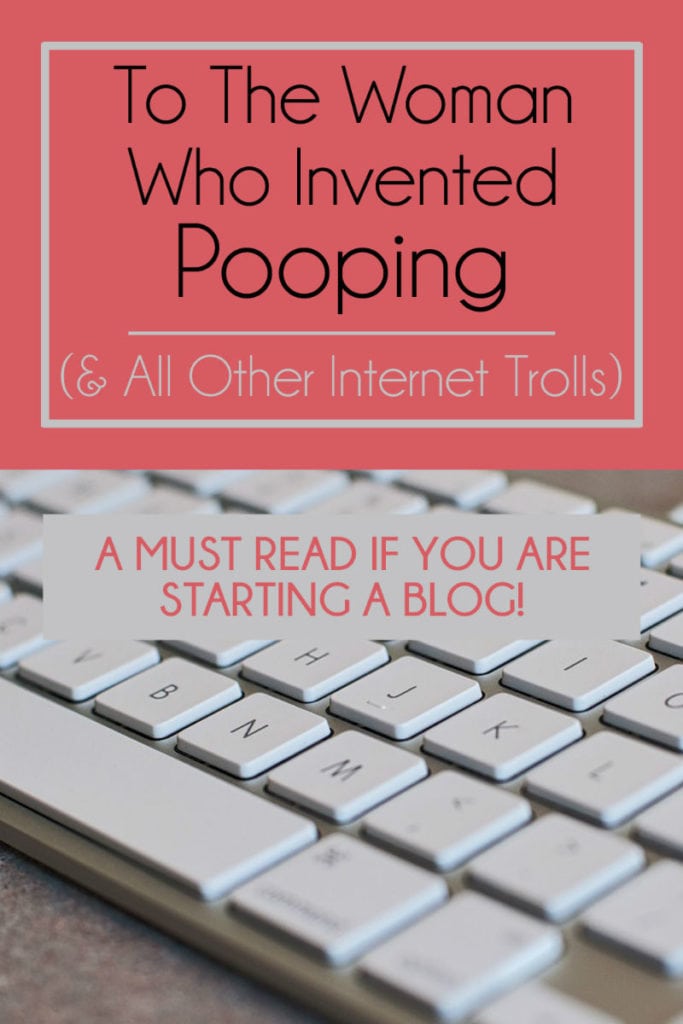 SUBSCRIBE AND I'LL SEND YOU MY PIN TEMPLATE STARTER KIT: 11 GORGEOUS PIN TEMPLATES, MY PERFECT PINS CHECKLIST, AND SOME OF MY BEST TIPS THAT YOU CAN IMPLEMENT FOR BETTER PINS IMMEDIATELY.
you can unsubscribe at any time
7 shares