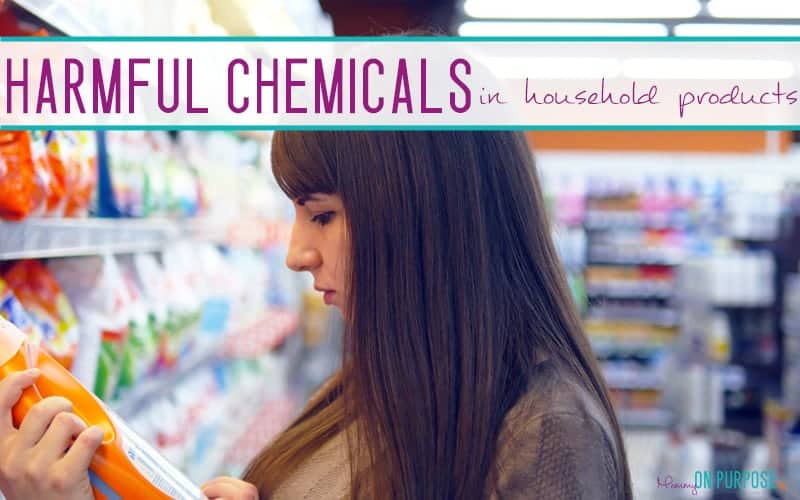 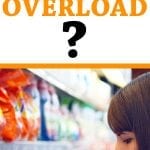 How much thought have you given to the harmful chemicals in household products you use every single day?

It’s not something I personally LIKE to think about because it feels like something I have so little control over. In fact, I’m almost of the opinion that we can’t avoid harmful chemicals in household products… because they are in almost everything we use on a daily basis. It could actually be panic inducing, if a person over thinks it.

I was doing some research for this post, which was originally going to be about natural ways to keep your home clean, but the things I learned about the toxins in our homes are things I wanted to share with you first.

5 things you should know about the harmful chemicals in common household products:

1 ) The laws governing these things are WEAK.

There are currently almost no laws in place that force manufacturers to warn consumers about the potential dangers of chemicals in cleaning products. (This BLOWS my mind! It really does offer an insight into just how far we still have to go towards removing harmful chemicals and toxins from our everyday lives.)

As of early 2017, California is trying to pass such a law – which would be a HUGE leap forward… making them the first state in the country with this requirement. Canada also has no such laws in place.

Not only are there no laws about warnings or disclosures, there is also no federal regulation of chemicals in household products, according to this article. (And, ditto for Canada again. Europe has slightly better laws in place to protect people, but even they are lacking.)

2) The harmful toxins aren’t ONLY in cleaning products, they are everywhere.

Your cookware (non-stick frying pans for example), your shampoo, perfume, anti-antiperspirant (and just about any other cosmetic / hygiene item you can think of), your couch (likely treated with flame retardant or stain-proofing sprays), air fresheners, and plastic containers (just to name a few) are likely all adding to the chemicals that you’re exposed to on a daily basis.

Then throw in those cleaning products that we KNOW are toxic, and other things we are exposed to often: gas and anti-freeze for the car, or paint, varnish, glue, and pesticides on your veggies. The chemicals are everywhere, and we are going to be exposed to some of them no matter what measures we take to avoid them.

This list just makes me want to control the controllables all the more.

We all know that there’s some danger in mixing chemicals – we’ve heard stories about women who passed out in the bathroom after accidentally mixing one product containing bleach with one containing ammonia. We know better than to do THAT.

But, that doesn’t mean that we know ALL the risks of all the chemicals we are exposed to on a daily basis – particularly when we’re exposed to them in conjunction with OTHER chemicals.  It’s impossible to actually gauge ALL the risks, because the studies have never been done.

4) Toxic chemicals in household products are wreaking havoc on our hormones, and worst of all, on our children’s hormones.

BPA – remember that? The studies showed such a link between BPA and miscarriage, early puberty, and obesity (among other things) that the world basically boycotted BPA and now we all drink water from glass bottles and don’t send lunch for our kids in plastic and we never think about it anymore.

But BPA is FAR from the only toxin that affects our hormones in negative ways – why are we ignoring Phthalates, Triclosan, and Perfluorinated chemicals (PFCs)?

Let’s just talk ONE of these chemicals and how it might affect our children:

Prenatal PFC exposure has been linked to

This is a scary list, and what’s more scary is the realization that if you cook with non-stick cookware (teflon) while you’re pregnant then yes – your baby has had prenatal PFC exposure.

(Here’s an interesting list of common harmful chemicals in household products and their effects on our health.)

5) We can’t stop our exposure to these toxins.

But we can drastically reduce the stress on our systems by making a few changes.

Basically if you’re alive today, you’re going to be exposed to chemicals. We can’t get around that. They’re in the air, they’re in our drinking water, and they’re in our food. (Going 100% organic isn’t really an affordable option for most people.) Even toilet paper comes with toxins. In fact, Phthalates are found in almost 100 percent of people tested.

This just means, that more than ever, we need to be aware of what sort of chemicals we are using and choose natural and safe alternatives when possible.

This is what happened that first brought the threat of harmful chemicals in household products to my attention:

My mom (who sings in a gospel group) announced one day that she didn’t think she’d be able to sing much longer. She wasn’t sure what was wrong with her tongue, but it burned constantly and it was starting to get weird “bald” patches on it.

Unfortunately, the Dr. couldn’t tell her what was wrong – or give her any idea of how to fix it. So she lived with her weird burning tongue for months… until a dental hygienist told her the probable cause: toxic chemical overload.

Her body was poisoned by chemicals, and “geographical tongue” is a not-uncommon symptom. The hygienist had experienced it herself, in fact. She went on to tell my mom that dentists see it all the time… probably because of the mercury used in dental fillings. (There’s a whole SWACK of weird symptoms you can get from mercury or toxic overload.)

It’s also common in women in general, because they tend to be exposed to chemicals almost every single day – IN THEIR HOMES!

Mom was thrilled that she had a diagnosis… but no idea where to look for a cure.

After much research on how to cleanse harmful chemical toxins from the body, she ended up buying a far-infrared sauna, and literally sweating out her toxins over the next six months. (You can do cardio like crazy – that helps too!)

Her tongue healed, but interestingly, the burning still comes back for few days when she is exposed to strong chemicals.

Your body WANTS to help you get rid of toxins.

There are a whole bunch of  very expensive “cleanses” out there, but the truth is that our body is MADE to clean toxins from our systems – that is the nature of the liver + lymph system.  A few toxins here and there won’t really hurt us. It’s only when we pile on more chemicals than our bodies can possibly processes on their own that we run into trouble.

(Like when we allow our homes to be over run with household products containing hundreds of dangerous chemicals.)

Sweating, drinking water, and cutting down as much as possible on our exposure to harmful chemicals in household products and everyday toxins is an excellent start to healing the body and preventing any toxic overload on our systems.

A person could go crazy if they thought about this TOO much, though.

Because I don’t want to live my life in a frantic panicked state, I don’t let the idea of the horrible toxins in my home ruin my life. I just do my best to avoid the ones I can avoid, accept the ones I can’t avoid, and keep my body as strong and healthy as possible. It’s my absolute goal in raising my son to protect him from as many harmful chemicals as I can – to give him the best shot at long term health possible.

6 thoughts on “Harmful Chemicals in Household Products: 5 Terrifying Things You Need to Know”

SUBSCRIBE AND I'LL SEND YOU MY PIN TEMPLATE STARTER KIT: 11 GORGEOUS PIN TEMPLATES, MY PERFECT PINS CHECKLIST, AND SOME OF MY BEST TIPS THAT YOU CAN IMPLEMENT FOR BETTER PINS IMMEDIATELY.
you can unsubscribe at any time
225 shares